At first glance, there doesn’t seem to be any major changes. However, significant improvements are immediately noticeable on the underside, which provide more stability. 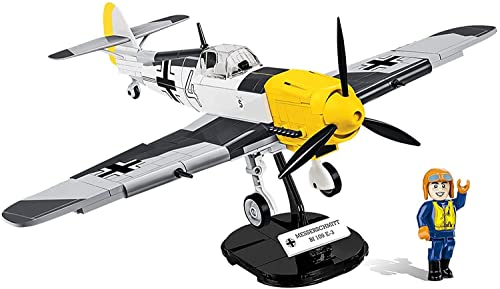 The entire wing construction is built in one piece from plates and tiles. The flat tiles with studs from COBI are used directly on the underside. On the one hand, these ensure a nicer look and, on the other hand, more stability. The rear is initially only one stud wide. Both side parts are already pre-assembled and printed over the entire surface. After the cockpit is done, I build the pilot. This is a touch too big and the cockpit cannot be closed completely. This is hardly noticeable visually and would therefore not actually be a problem. However, the entire tail sits with just one stud on the wing construction and is countered by the cockpit glass. This doesn’t work really well if it doesn’t close completely and it gets a little wobbly.

We have the same game at the front. The engine block is attached from above with a tile and then countered from below with a 2×3 plate. This is much more stable than the rear. The landing gear has improved significantly compared to its predecessor. Some may prefer the brickbuilt construction of the old set, while others may be more comfortable with the molded parts of the new model. After the base was built in the current form, the model is already finished.

If you ignore the underside, the look hasn’t changed much. The predecessor also looked very good with its large-scale prints. Unless you are a collector and already own the old model, there is no reason to necessarily buy the new model.