Modern warplanes are also very obese. The F-15 is the latest model from COBI, which with 590 components can offer a few hours of building fun. 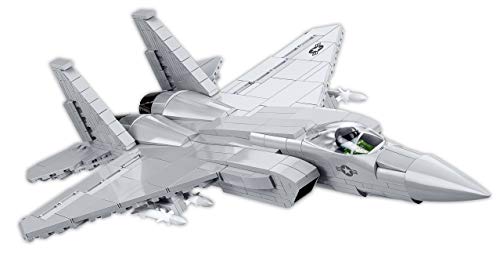 There are no individual wings on this model. Instead, we build a complex of wings and middle section. Plenty of plates and tiles are used for this, which are reinforced from below by COBI’s special, flat tiles.

After the middle part has been completed, we build the front part including the lower area for the cockpit. Some of the few printed parts are also used here.

We switch from the front to the rear and build the 2 jet engines. Then the cockpit is created from a few bricks and several large molded parts. The special legless figure with close-fitting arms is used here again. This and a printed part with the instruments of the cockpit are the only interior.

At the bottom we now attach 4 rockets, which are built from 2 parts. The chassis was kept very simple and does not fold in as you know it from other models. The end of the F-15 is made by the rear wing and the tail unit, both of which are built completely without molded parts.

COBI uses the usual stand, which is created in a few construction steps. This of course also includes a printed nameplate. A comparison with the other models such as the F-18 and Mirage shows that the F-15 is currently the largest model of modern combat aircraft.

If you are into modern combat aircraft and also like to play with clamp blocks, the F-15 is a beautiful model for the showcase and also for the children’s room. It is stable enough to be played on. However, the level of detail is less than that of the F-18. The landing gear cannot be retracted.