The new Bismarck is available and brings some improvements. This review shows what has changed and whether it is worth switching from the old one. 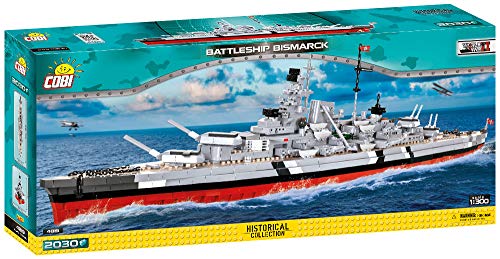 The basic structure differs only marginally from the predecessor. We put a lot of panels together and build upwards by reversing the direction of construction. The first parts of the side panel are also already built and attached to the base.

Next up is the bow of the ship. Here, too, a lot of reverse engineering is used. After it has been attached to the shell, it is the turn of the cladding on the underside. This is followed by the stern, which, like the bow, is built in one piece.

After it is completely finished, we can assemble the battleship and get a first impression of its size. Now we build numerous parts of the cladding and attach them. In most cases, both sides are identical and are only built in mirror image.

Except for a small point, the entire fairing is attached to the fuselage. Then we start with the superstructures, which differ from the predecessor in only a few details. The new version has a lot more smaller guns.

The anti-aircraft guns were taken over from the Enterprise and now consist of molded parts. The same applies to the accompanying aircraft, which one or the other may know from the Graf Zeppelin.

Finally, of course, we also have to build a stand, which has been reinforced in the new version. Instead of 4 studs, the Bismarck is now held by 8 studs.

The comparison of the two models shows hardly any changes. Small changes were made here and there, such as the large guns. The flak and the escort aircraft are no longer built from bricks, but consist of molded parts. The superstructures were only partially and marginally changed. The hull is almost identical to its predecessor. The old set contains stickers for various parts of the structure, which were completely printed on the new model. The fuselage is printed on both versions. Since the USS Enterprise made small guns available, the new model made ample use of them.

With the new Bismarck, COBI has released a very nice model with many details. However, the changes to the predecessor are limited and there is hardly any reason to buy the new model if you already own the old one. Unless you’re a collector or really want to build a new ship.