I was particularly looking forward to this aircraft carrier because it was never really finished and used in the real world. More than 3000 parts ensure a very long construction fun. 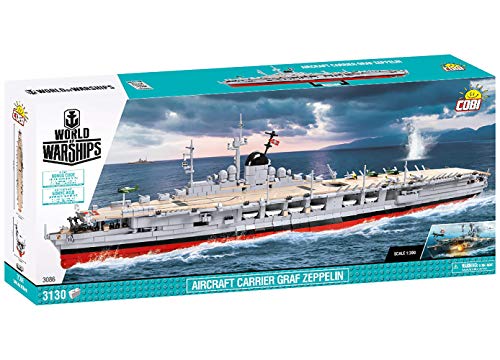 The Graf Zeppelin was one of the few ships that survived the Second World War and was only sunk in 1947. Until then, it had been used by the Red Army as a residential ship. 2 torpedoes finally caused the sinking in front of the Gdansk Bay. It is still there today and falls within the administrative area of the Russian Federation.

The instructions for this model consist of 3 booklets and a total of 701 construction steps. These were divided into 13 sections. By graying out the previous building steps, it is no problem for even beginners to build this large ship.

Anyone who has ever built a COBI ship will surely know the beginning. We also start here with the rear, which is being worked on with plenty of reversal of direction.

Even with details, no savings are made in these early construction steps. At this point, however, you could have done without the drive. This sits quite loose and likes to fall off again. I removed it at some point and only put it back in at the end.

In the next step we take care of the bow of the ship. Here, too, there is no saving in reversing the direction of construction. There is no other way to solve the shape.

Unfortunately, I was missing a link in the chains for the anchor. Since a different size was used here, I had to take a slightly larger link from my spare parts box.

The front part reminds a little of that of the Enterprise. However, it is a little more delicate with the Graf Zeppelin. In the meantime we have built the model so far that we can put all the parts together and get an idea of the size.

The following steps largely consist of the side panel, which is built and attached in separate steps. The printed flight deck is now also used. The last construction phase consists of many small parts, so it takes a little longer.

After the actual ship is finally finished, it is the turn of the 6 micro planes. These consist of the complete fuselage, a 1×1 rounded plate and the propeller. The only thing missing is the base on which the ship can be displayed.

In order to be able to estimate the size and scope a little better, I compared the Graf Zeppelin with the Bismarck and the aircraft carrier Enterprise.

So far, the Graf Zeppelin is the set with the most building blocks. The set-up takes a correspondingly long time. Many small details also delay building fun a little. At some point this will also be over and the shelf will be enriched by a beautiful model.