Most should know the Red Baron. Of course, there must also be a corresponding set from COBI that represents the red triplane. 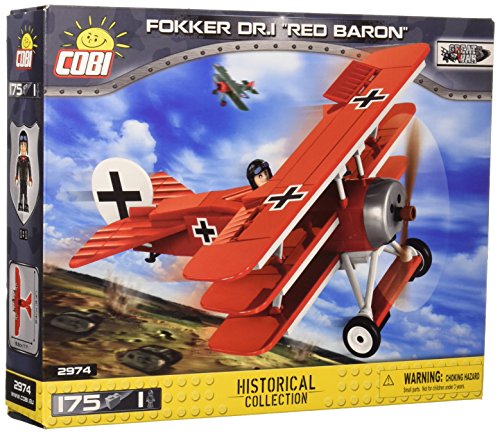 Since this set consists of just 175 parts, the instructions are of course correspondingly small. Both the format and the number of pages are smaller. After just under an hour and 45 construction steps, the red plane is completed. Most parts of this model are printed, but there is a sticker sheet for national emblems that can still be glued to the wings.

With this aircraft we start with the lower wings to which the engine and the tail are attached. The pilot also gets his seat at this point.

The rear sits only on 2 studs after attachment and is accordingly shaky. However, this changes with the side parts that stabilize the whole. With the middle wing it looks almost like a typical aircraft from the First World War.

But since we are building a triplane, the upper wings are still missing. After reinforcing the model with a few plates from below, we put on the large propeller.

The actual chassis consists of two molded parts, to which the two wheels are attached by a separate construction. The printed type plate consists of just two parts and is built quickly. After the pilot is seated, the model is ready. If you like, you can now stick the emblems on the upper wings. All other parts are printed.

Even if you are primarily interested in models from World War II, you can put the Red Baron on the shelf. Visually it is successful and the price can often be a real bargain. As part of an offer, I just paid 15 EUR including shipping.