CaDA can also do tanks, as you can see on this new model. With 1722 components you have a long time building fun and the T-90 can also be motorized. 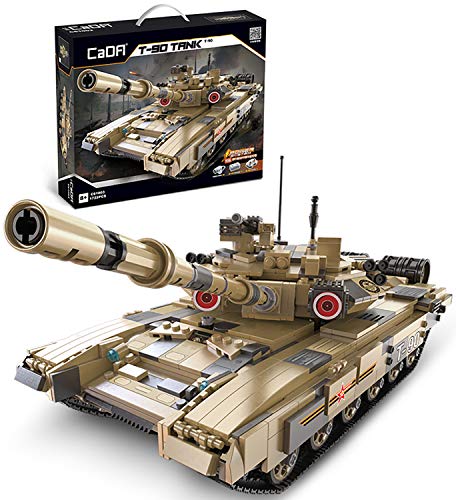 First we are greeted by a large sheet of stickers. The nice thing about it is that no sticker goes over several stones. The instructions are easy to understand even for beginners. Only the new components are shown in color. The entire construction is divided into 4 construction phases, even if the instructions consist of 5 sections. The last step describes the motorization with the optionally available motors. At the end is the complete parts list for this set.

We start this tank in the classic way with a layer of plates that form the basis of the hull. Due to the size of this 1:20 scale model, we of course need plenty of it. The mountings for the rollers do not consist of modified plates, but of technical axes. The first technical components will also be used in the next construction steps.

Since we also have an inner workings here, the tub remains largely hollow. This does not affect the stability. The clamping force of the CaDA building blocks is enormous. Since the T-90 can be motorized, appropriate precautions are of course taken in the form of axles and gears. Then we put rubber on 24 rollers and mount them on the hull. The tracks are finer than I am used to from COBI. We need 186 pieces for this model. Despite the rubberized wheels, we need a little pressure so that the tracks roll on smooth surfaces. The finished model runs very well later.

In the coming construction steps, many parts for the armor will be built and attached separately. It is also the turn of the inner workings. The first stickers are also used. The level of detail is very high on this model.

Next we build the turret, which also has plenty of details. In some places I would have chosen a different order in the instructions, which would have made building easier.

After the turret has been completed, it is the turn of the gun. This looks a bit strange, because apparently there are no components of CaDA, as used by COBI. The gun is more like a tightened pearl necklace. In my opinion the main weak point of this set. Everything else is really well solved. Finally I put all the stickers, not one of which goes over several bricks. This gives us a much nicer look, even if the printing colors don’t quite match the colors of the building blocks.

Building the T-90 was really fun. The clamping force of CaDA is enormous and everything is absolutely secure. The 1722 parts also made for a long construction fun at a low price. Only the gun could have been solved much better.