The big world of alternative bricks

You are here:
Change language to:

The predecessor was already great and COBI went one step further with this set. In addition to the good quality, there is also a love of detail and excellent implementation. 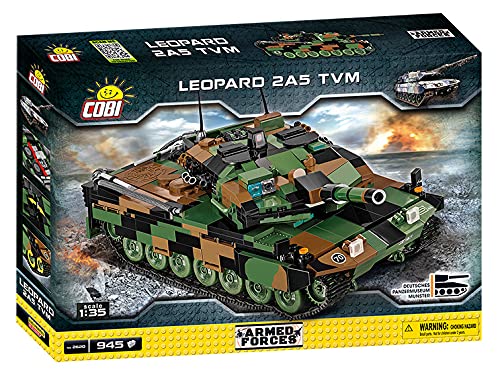 The construction begins on the one hand unfamiliar and on the other hand absolutely classic. First we build a very narrow base for the hull, to which the mounts for the rollers are then attached. Then it goes straight to the width. Several plates provide a neat construction area and the first parts of the engine are placed in the rear.

Two spare wheels, which are supposed to represent turbines, provide more optics in the engine compartment. The front and rear are of course built separately again and attached in several parts. The typical shape of the leopard is slowly becoming apparent. The rubber of the rollers are very hard and difficult to put on. The chains are not really perfect either. They go well with the rest of the look, but the running properties are rather mediocre. Nothing works on smooth surfaces without pressure. Even on paper you still need some pressure. The side skirts are now added and can then be folded down.

After the front part of the hull has been tiled, we build a large cover for the engine. This easily takes up a third of the entire hull. The rear only differs from its predecessor in small details. Now it’s time for the massive turret. This is very well done and is built in 2 parts. After these are put together, it is the turn of the short gun.

With the many small details, the turret of this version looks really great. For this model, COBI used molded parts that make the turret taper at the front.

This model is not just an upgrade of its predecessor, but a completely different model. As a collector, of course, you have to have both. In terms of the level of detail, however, the two do not differ too much.