With the Panzer I, the first model with the new dark gray moves into my collection. What else has changed from the predecessor, you can see in this article. 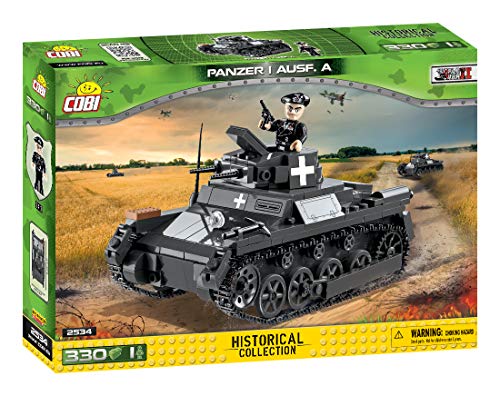 Until now, there was a separate tabletop card for World War II models. This must now be cut out of the instructions. Otherwise, the old construction steps are grayed out as usual and only the bricks to be set are colored. There are no individual construction stages, which would make no sense with just 330 parts including the tracks. The model is finished after 45 construction steps.

With the new Panzer I, we don’t start with large panels, but put together several parts that are then built over and stabilized with bricks. Finally, the lower hull gets a large 8×9 plate. As with the predecessor, the engine is again a printed tile.

The following steps differ only slightly from other models. The hull is built further and the first castors are attached. A few nice details can now be seen. However, some attachments are not as tight as their predecessor. A tile that is only attached to the end with 2 studs can be removed relatively easily.

The hull is now completely tiled and we can dedicate ourselves to the rollers and tracks. New molded parts are used for the castors, which look much better and more realistic than the predecessor. The tracks do not run perfectly on smooth surfaces, but with a little pressure it works.

Now we come to the biggest shortcoming of this model, the turret. It’s a very fragile construction and you can’t touch it too tightly. There is no lower plate for stabilization and you can see through when the hatch is open. It is by far the worst turret I’ve ever built from COBI and the old version was much better.

The dark gray of this model looks much better than the light gray of the predecessor. However, the level of detail has hardly changed. The turret is anything but stable. The model looks chic on the shelf, but it is unusable for playing.