The long-awaited Tante JU is finally available and of course I built it up directly. Like almost all new models, this one is also completely printed. You can see everything else in this article. 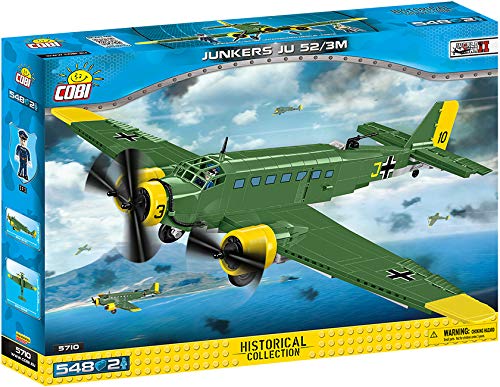 Since the JU 52 is a fairly large model, we build the wings individually. Basically, the construction does not differ from the smaller models. The first step is to build a base out of slabs, which is then covered with tiles.

As soon as the wings are finished they are connected with an 8×16 plate. The cockpit is built separately and attached to the wing construction.

It continues with the rear area and the construction of the cargo hold. Nothing really can be stowed there.

In the next steps, the model will be covered with printed tiles over a large area. A door is also attached. However, the format does not fit for a minifigure.

The entire cockpit in this set consists of a large molded part. Before this is attached, the pilot must be placed. The molded part makes the front look very realistic. However, I would have liked to have another transclear molded part that is attached from the inside. It looks more like an open cage.

Finally, the 3 motors are built and the propellers are attached. The second figure in the set is a skydiver with the appropriate equipment. The antenna, which is realized with a thread that is not included in the scope of delivery, is still a bit cumbersome. Any sewing thread can be used here.

Visually, the Ju 52 is really successful. Of course, various molded parts also ensure this. Due to the size, however, you have to have plenty of space to place them. Of course, it doesn’t fit on an average shelf with a depth of 30cm.