The long awaited new version of the Sherman Tank is finally out. It’s much more detailed than the predecessor and of course it has more parts to build. 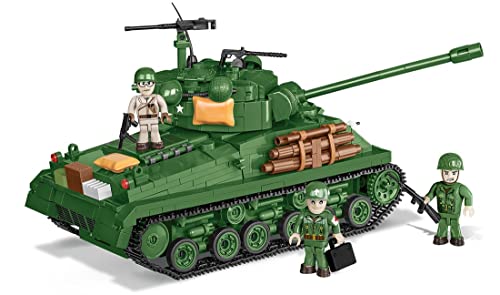 While nothing has changed in the construction steps and old construction steps are grayed out as before, a parts list has been added since the beginning of the year. Unfortunately there is also a negative development. The tabletop card is no longer included, but has to be cut out of the instructions. As a result, it has become significantly thinner. After 3 construction phases and 106 construction steps, the Easy Eight is ready.

Everything starts with an 8×16 plate. Instead of several layers of plates, you can continue directly with bricks. So we have a massive structure relatively quickly, which is then covered with plates and widened.

In the further course, various separate construction steps are carried out, which are then attached to the hull. A difference to the predecessor can already be clearly seen here.

For a short time we turn the model upside down and attach a few components to the back of the base plate. Why this step is not done together with the wheels is not clear to me. Before the hull is turned over again, we tile the surface and build the beveled rear armor.

Now it’s the turn of the wheels and tracks. Here again a number of rubbers have to be put on. Finally, we test the running properties of the tracks. It takes a rather rough surface or a little pressure for the tracks to roll properly.

The turret of this model is very detailed. As with most other models, the armor is built and attached separately. Finally, we build a few small details, such as the tree trunks, on the Sherman.

A lot has changed compared to the old model. The level of detail has increased significantly, although this does not only refer to the many attachments. The suspension of the rollers no longer consists of molded parts. It is built completely and looks a lot better. In the end we have a great model that was great fun to build.