There is also an occasional upgrade for aircraft. The new Messerschmitt BF 109 F-2 uses new construction techniques, not least because of the imprints. The result is impressive. 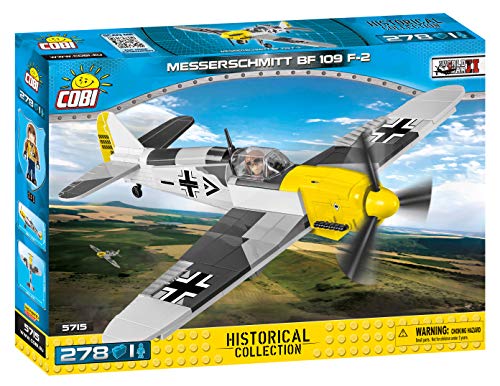 The Me 109 has been mass-produced and used in the Luftwaffe since 1937. Different variants were used as a fighter plane, fighter-bomber, night flyer or as a reconnaissance aircraft. Even if it was supplemented by the Focke-Wulf Fw 190 from 1941, it was the standard aircraft of the German Wehrmacht until the end of World War II.

We certainly don’t need to go into the standard bricks anymore. However, this model also uses special molded parts with printing. This was the only way to solve the large-scale printing, which the predecessor still had to do with stickers over several building blocks.

This model starts with the wings, which also use the first large printed part. The camouflage pattern is again solved by different colored tiles. After both wings have been connected, the pilot also gets his seat.

In the next step, we create the rear and use plenty of reversal of direction. While the previous models still used a lot of plates, printed molded parts are used here.

In order for the aircraft to move, it needs an engine and propeller. This is built entirely in yellow and with many small parts. The chassis receives the familiar molded parts that snap into place and are therefore very stable. However, the tires are a little more shaky because they are held by one stud.

Ultimately, of course, we also need a stand. This is no different from the other new models. However, it is significantly smaller than last year. After the antenna has been attached and the pilot has been placed, the aircraft can be attached to the stand.

A lot has happened compared to the predecessor. Above all, the prints and the associated molded parts give the model a sleek appearance. The building fun was great again.