Many have been waiting for this mortar. With 1500 parts and the dark gray you get a very nice, detailed model that is really not lacking in building fun. 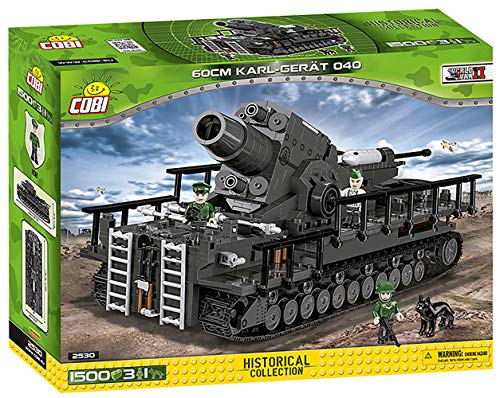 COBI has recently done away with a separate tabletop card and instead prints it out in the instructions for cutting. This year, however, a parts list has been added that has long been a matter of course for other providers. There are a total of 269 construction steps, which have been divided into 4 sections.

Even the largest model has to start very small. In the case of the Karl Gerät, there are plenty of plates on which bricks are then placed for stabilization. The first separate add-on parts are also quickly built.

Since a lot of large parts are built in, the model quickly grows in size. With the two exhausts and the driver’s seat, the first color accents come on the model. By far the largest part remains in black and dark gray.

The next separate construction steps widen the mortar significantly and cover the upper rollers. For the lower rollers, the model must first be turned over.

After the tracks have been attached, we can concentrate on the slider that houses the gun. A couple of gears ensure that it can be adjusted in height.

The gun is built in 3 stages and then placed on the slider. In the next few steps a lot of small details will be added.

The latter larger component is the guidance of the grenade, which is followed by plenty of details.

The Karl device is a really big chunk with which you have several hours of building fun. The Maus, which is also quite large, can easily be hidden behind it. The model is not cheap, but not expensive for 1500 parts either. The price is of course relative.