The Panzerkampfwagen VIII Maus was not a fictitious tank that only existed on the drawing board. The COBI model hit him very well and with its almost 900 parts, you have been busy for a while. 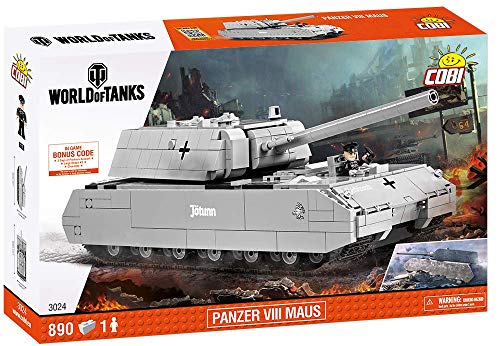 There were only 2 prototypes of this super heavy tank that were never in combat. The Krupp company was originally supposed to develop a 100 ton tank. Porsche was later commissioned and was finally awarded the contract. The rather delicate name “Maus” was chosen for bluff, so that in the case of espionage it was not immediately apparent that it was a gigantic tank. After many adjustments, the given 100 tons ultimately became 188 tons. One can no longer speak of off-road mobility here and hardly a bridge would have supported this monster.

Even if this set has been on the market for a few years, you do not notice any difference to the current components. The clamping force is excellent and everything fits as it should be. A few parts were printed. Since it is a World of Tanks model, everything else is only included as a sticker. So the Maus can be adapted to the in-game vehicle.

There is also nothing new to report in the assembly instructions. With it, the tank can be easily assembled. Old construction steps are greyed out and you can see immediately where the new, colored parts have to be placed.

Despite the considerable size of the model, we do not start with the 4 large, enclosed plates. Instead, many small plates are connected with bricks and stabilized by several layers. Only then are the large panels used, which cover the lower part of the hull.

We then put plenty of large bricks on this cover. Both the front and rear armor are built separately and attached to the hull. This is still covered and receives a row of brackets on each side, to which the side armor will be attached later.

After several grid tiles and large tiles have been placed on the hull, the underside is stabilized with a few plates. Now it’s the turn of the castors. A total of 24 must be pressed in rubbers. Then you realize that you have a thumb. As soon as the tracks are put on, the side skirts can be built and attached.

The large tracks run relatively well, though not on smooth surfaces. Light pressure is required here. The hull is now complete and we can dedicate ourselves to the turret.

Due to its size, it is built similar to the hull. The rear and side armor are placed on the turret by reversing the direction of construction after completion. The smaller front armor is built and attached together with the gun.

The 890 parts of this model are made up of many large bricks and plates. So you really get mass for your money. Due to the size, there is also very little fiddling and you can look forward to relaxed building.