The T-34 from COBI has received an update and a lot has changed. This article and the Speed Build show what has improved or maybe even worsened. 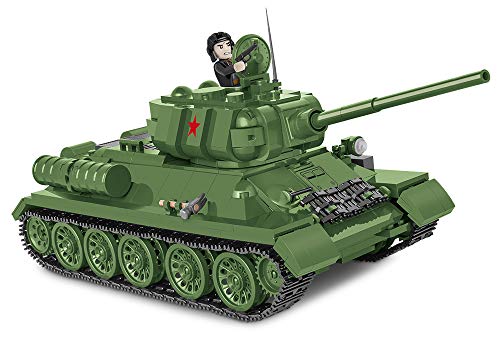 The beginning is not that different from the old model. Plenty of panels are used as a base, which give the hull enormous stability. As usual, we also build separate parts that are then attached to the hull.

After the hull has grown by a brick height, we build the engine, which is clearly distinguished from the rest of the T-34 by its bright orange. The rear armor is also built separately, as are the front and rear covers of the tracks. With large slopes, the model gets the typical shape of the T-34.

The hull gets some details and is then covered with tiles. Before it is completely closed, it is the turn of the rollers and tracks. These run really smoothly and do not need any pressure from above.

Before we turn to the turret, the engine gets its cover. This is only attached to 2 knobs and can therefore be easily removed. The turret is being built again with a lot of direction reversal. However, in this set, the side armor is not built separately, but directly on the turret. Printed slopes with a red star or a Polish eagle are included so that you can choose your preferred national emblem.

After the turret has been completely tiled, we put the figure together. However, placing these in the tower is not that easy. It is very tight and when you insert your legs push out a slope on the side. So you have to trick a little.

From a purely visual point of view, the new T-34 has not changed too much. Only in direct comparison do you see that there have been some significant changes. The new model is one stud narrower and now uses the narrow tracks. Whether that made sense remains to be seen. It was precisely the wide tracks that made the T-34 so successful in the Russian mud.