The new Kübelwagen from COBI is used in the Afrika Korps. You can see how it differs from its predecessor in this article and in the Speed Build. 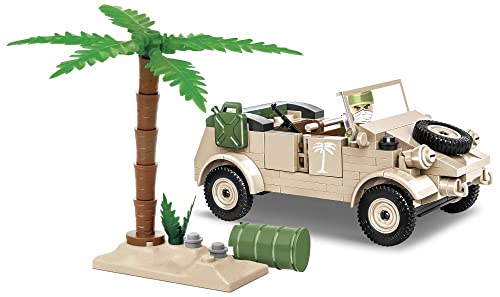 The small set with its 195 components is built in 28 construction steps. With this small number of parts, there are of course no construction phases. Otherwise, the little booklet is based entirely on its big role models. You don’t have to do without the parts list or a printed tabletop card. Old construction steps are grayed out so that the new, colored ones can be easily recognized.

Everything starts with 2 layers of plates on which we then build the chassis. The wheel arches differ significantly from the more angular versions of the predecessor. In contrast to the old model, this Kübelwagen also has seats that keep the driver in position.

The other superstructures are a bit narrower than with the predecessor. A printed license plate has also been dispensed with here. The doors, however, are identical and only differ in the imprint. Here it is of course the sign of the Afrika Korps instead of the Balkenkreuz. Most of the details hardly differ from the old model, including the indicated convertible top. The tires, on the other hand, are narrower and look much more delicate in a direct comparison, which is shown in the video. There weren’t any absences here, but a part that is used to fix the tires was in the wrong color in my set. Since it sits under the Kübelwagen, you can’t see it later.

After the vehicle is completed, a palm tree on a large molding and the minifigure’s turn.

The old model looks a bit more massive, but the new Kübelwagen of the Afrika Korps looks better as a display model because of the additions. Since it is very stable, it is also suitable as a play model.