At first glance, these US military SUVs look very similar. However, COBI has given each one its own molded part and the structure also differs in some areas.

All 3 models consist of a single construction phase with 91 construction steps and each contains a minifigure.

Basically, with COBI only the parts to be installed are shown in color and the rest are grayed out. A parts list contains all the instructions. The tabletop card can only be found on the two WW2 models. This takes up a complete page of the small instructions.

The basis of the Ford GP is formed by 3 plates, on which further plates are then placed. After the steering wheel and engine have been built, the complete body is attached in the form of a large molded part.

Since the GP is a four-seater, it has 2 seats in the front and a built-in bench in the back. Then further molded parts are used. The windshield, hood and wing mirror are placed. Finally we put 5 tires of 3 parts each on the model and build the minifigure. 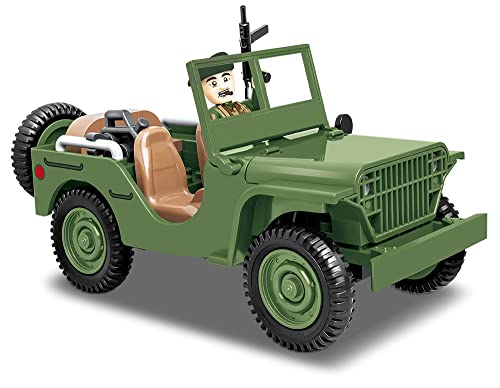 The structure of the Willys MB differs from the GP in only a few points. The first visible difference is the structure for the machine gun. The grille also differs significantly and the headlights are no longer covered here. The body is also a large molded part. But here COBI did not use the same part as with the GP. Despite only marginal differences, a new mold was created. The Willys’ seats and rear bench are dark green.

The windshield and bonnet do not differ or only differ in the imprint. In these construction steps you can see another difference in the body. The petrol can is attached to the rear, for which the molded part has got 2 knobs.

All that’s missing is the machine gun and the minifigure and the Willys Jeep is ready. 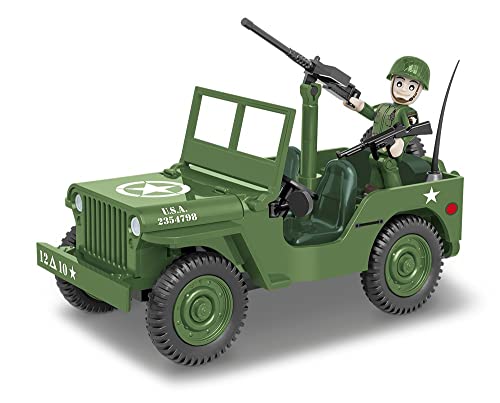 The structure of the M151 already differs in the first steps, even if only marginally. The plate modified to accommodate the wheels of the rear axle is a 2×4 plate instead of a 1×4 plate. The rest of the structure up to the body hardly differs from the Willys MB. In the stern there is a printed 1×2 brick as a radio device and directly behind it is the antenna.

A windshield that is different from the other two models was used for this model. But the machine gun and its holder are identical. In contrast to the Willys Jeep, there are fewer and smaller prints here. After attaching the wheels and building the minifigure, the model is ready. 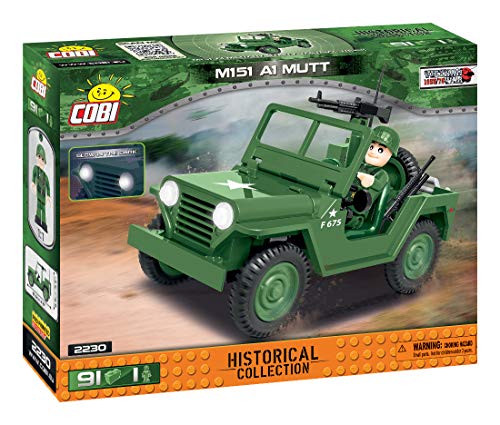 All models at a glance

At first glance, the only difference between the 3 models is the different imprints. While the Ford GP is only rudimentarily equipped, the other two at least have a machine gun attached. If you are not a collector and just want an off-road vehicle, then the Willys MB, which probably also has the most famous name, might be a good choice. Even if one likes to call vehicles of this kind a jeep, only the Willys MB is a “real” jeep and the forefather of today’s brand name. But the GP was also called a jeep. One theory also says that the name Jeep developed from this. GP is pronounced Ji Pi. If you leave out the i at the end, you get a JiP or Jeep. After all, COBI has taken the trouble and, despite marginal differences, made 3 different shapes for the body.