Since I already own the mouse and the Jagdpanzer E-100, this colossus also had to be built. In this review you can see how the structure is designed and how the model performs in comparison to the other large tanks. 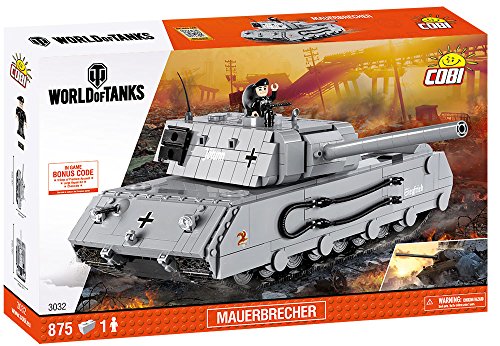 There is nothing new to report here, especially since the model is no longer a novelty. Everything fits perfectly and there was no surprise when it was set up, apart from a small problem towards the end. There a chain link did not fit on 3 individual knobs. However, this difficulty is of a structural nature and has nothing to do with the quality of the building blocks.

As usual with all WoT models, stickers jump out to us, with which the tank can be adapted to the counterpart in the game. There are a total of 149 construction steps, which are divided into 4 construction phases.

The tank of the tank is made from plenty of bricks and plates, so that we get a very solid block again. The chassis is separated by 4 large 8×16 plates, on which large bricks and plentiful tiles are placed.

In the following steps it is the turn of the front and rear armor. Both are equipped with various details and will only be fully connected to the rest later.

The casters are no different from most other models. The largest links with 4 studs are used as chain links. As soon as the chains are pulled up, it is the turn of the side armor. These are built separately and then placed on the tub.

Finally, the massive tower including the gun was built and equipped with a machine gun. The 2 tracks on the side can only be attached with difficulty because they keep slipping out. In the end I removed 2 studs so that they stay in place.

In the size comparison with the mouse and the E-100, the Mauerbrecher does not need to hide. Only with the Tiger 1 you will notice how massive the model actually is.

The construction of this model was once again a lot of fun. Thanks to the 875 parts, I was also busy for a few hours. He has found his place on the shelf next to the Maus and the E-100 and looks really great.