The tank created from the collaboration between World of Tanks and the Swedish band Sabaton is the template for this model from COBI. With the band as a crew and large-scaled colored prints, it has become a great model. 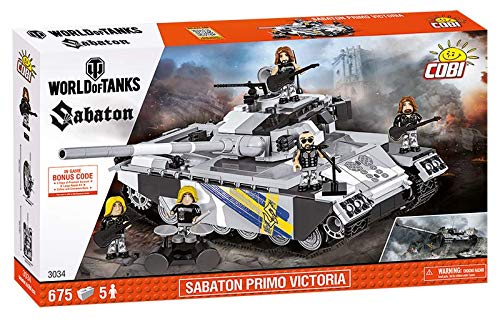 The song “Primo Victoria” from 2005 forms the basis of this model. The Swedish band Sabaton is a WoT fan themself and also deals with this topic in their music. In 2017 the Strv 81 Primo Victoria entered WoT. One year later there was another collaboration with COBI, from which a successful model made of bricks was created.

Even if it’s getting boring. The quality of the bricks is great. In addition to the individual stickers for WoT fans, there are various, sometimes large-area prints that are modeled on the original.

The instructions are absolutely typical of COBI. Former building steps are greyed out, so it is no problem to put the new bricks in the right positions. A sheet of stickers jumps straight at us. But this does not have to be used and can be used for personalization for WoT fans. The 116 construction steps are divided into 3 construction phases.

A large plate forms the beginning of this model. As with most tank models, the seats for the rollers and the guide rollers are attached directly. Then it is stabilized with large bricks so that nothing can wobble or bend. Then the basis for the cladding is set in the form of gray plates.

After this is also stable, it is the turn of the front and side armor. This is built separately and attached to the hull.

The first details and decorations also come with the tiles. Now the tank doesn’t look that small anymore. In the next step, the tracks are connected and mounted on the rollers.

The tracks run absolutely smoothly. Even on a smooth surface, you only have to push the tank and it starts rolling. That was also the last step for the hull and armor. Next up is the tower. With a lot of reversal of the direction of construction, a basis is created to which the side armor is then attached.

Of course, the tower also gets a few details. In addition to the removable rear armor, there are fog throwers and a machine gun. Contrary to the instructions, I only put the lower receptacle for the tub at the end, since the construction of the tower would otherwise have been a shaky affair.

Size comparison with Tiger 1 and Königstiger

Because I was thinking about buying this tank for a long time, I finally compared it to the Tiger 1 and 2. In the pictures it always seemed very small and inconspicuous to me. In natura, however, it is larger than Tiger 1 and almost comes close to the King Tiger.

Even if this tank is not a historical model, it fits wonderfully in my collection. It is definitely larger than it appears in the pictures. Since the complete band is also included in the form of figures, one or the other metal fan will surely enjoy this model.