With the Prinz Eugen, COBI has also sent a heavy cruiser into the race in addition to the existing battleships. With interesting construction techniques, a great ship with many details is created. 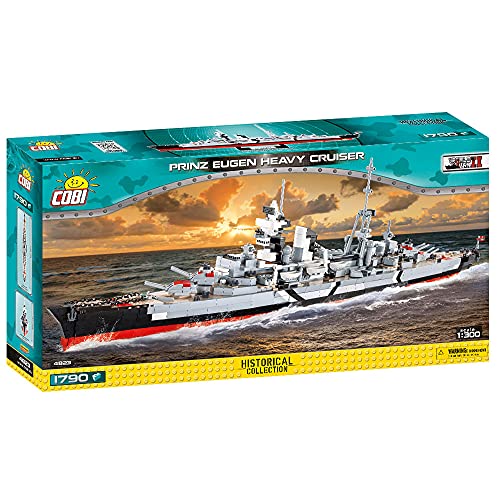 The 1790 components of this set are divided into 5 construction phases. The first two can be found in the first manual and the rest in the somewhat thicker second booklet. In this case, the parts list spans several pages. Despite the many parts, the construction is not rocket science and can be mastered well by beginners. All previous construction steps are completely grayed out so that the new, colored parts can be easily recognized and placed.

For experienced shipbuilders, the beginning is like a little dejavu. We go on length with plates and put plenty of bricks to reverse the construction direction. Even when building upwards with bricks, a large number of brackets are used, which then accommodate the separately built drop sides. In this way we finish the fuselage from the middle part and the bow.

After the middle part and bow have been connected, the gaps are filled with further separately built sections. Parts of the deck are also already tiled at this point. COBI uses all the possibilities of reversing the construction direction and uses both the appropriate special parts and bricks with iron-on beads.

Now it’s time for the rear. The construction is similar to that of the bow. As soon as the upper part is tiled, we turn the construction section over and set the first two propellers. At the end of the first assembly instructions we put all the parts together and see the cruiser in its full length.

There are now many small construction steps that sometimes require a certain amount of tact. All deck superstructures and masts are built individually and then placed on the fuselage. On the sides we also put some smaller guns made of molded parts. The 4 large twin guns, on the other hand, are built entirely from bricks.

At the end small details like the front anchor chains and 8 lifeboats are added. Unfortunately, COBI did not spend a catapult plane for this ship. You may have to build this yourself or take it as a molded part from another set. As soon as the stand has been completed, the cruiser can be placed on it and the building fun is at the end.

With some ingenious construction techniques and of course a lot of reversal of construction direction, COBI has once again created a very beautiful ship. I think the price is a bit high compared to other ships. A catapult plane could have been added to the cruiser, especially since the device was built for it. Otherwise great model that fits perfectly into my collection.