In Germany, this fighter plane is in the media right now, as it is supposed to complement the Luftwaffe. COBI offers different country-specific variants, of which I built the US version. 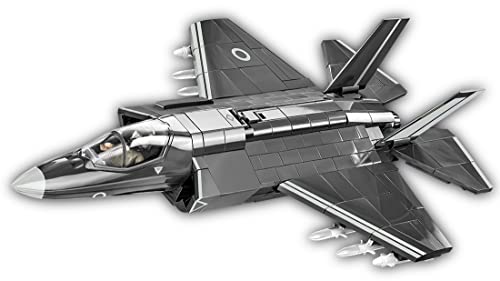 In contrast to historical aircraft, the wingspan is smaller, so the wings are not built individually. Instead, they are built in one go with the entire hull. COBI also paid attention to the special feature of this variant and integrated the lifting fan for the vertical take-off. The same applies to the engine, which can be tilted downwards. The cockpit consists entirely of molded parts. That and the studless wings give the impression that you are dealing with model building and not with clamping blocks.

The underside is fixed by numerous negative tiles and receives various rockets. The hinged bomb bays are also filled. The tail consists of a built elevator and the rudder made of molded parts. The only thing missing is the stand that has been common for some time and the model is ready.

The F-35 is a very nice and very stable model. So you could definitely play with it, even if it will end up in the showcase or other places within the collection for most people.