Sometimes even small changes have a big visual impact. To what extent this applies to the new Tiger 3000B, which replaces the old 3000A, I took a closer look. 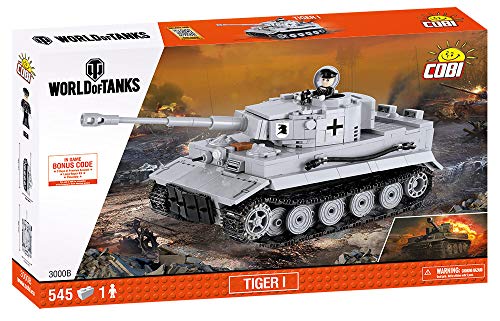 The tiger is probably the most famous main battle tank of WWII. However, due to its elaborate design, only relatively few vehicles were built. Even though he was able to penetrate most of the enemy tanks at great distances, the crew often had to deal with technical problems.

COBI once again delivers the well-known high quality. Unfortunately there are hardly any prints and plenty of stickers, which luckily you don’t have to use all of them. In my model, I limited myself to the beam crosses on the tower. They are simply part of it. The Tiger I is extremely robust and the tracks run smoothly even on smooth surfaces.

Only a few building blocks are set per construction step and only new bricks to be set are shown in color. Everything else is grayed out, which makes it very easy to set up. Instead of a trading card, these assembly instructions come with plenty of stickers, which is normal for the WoT models. After 2 construction phases with a total of 81 construction steps, the building fun is over.

Of course, we start again with this model with the hull, which consists of several layers of bricks and plates. This makes the Tiger one of the most stable models from COBI. Front and rear are built in SNOT construction and then attached to the hull.

When the lower part of the hull is finished, we start with the first tiles. Below that there are only 1-2 plates in most positions. The hatches for the driver, machine gunner and machine are also attached in this step. There are also the first optical details, such as the hoses on the sides. Before the tracks can be put on, we naturally attach the drive wheels and rollers to the Tiger.

When this is done, it is the turn of the turret. This differs significantly from its predecessor and looks much more massive. The construction, however, hardly differs. Once the base has been created, the rest is built and connected separately by reversing the direction of construction.

Finally, all we have to do is build the gun and attach the turret to the tank. Then we can take care of the tank commander.

If you already have the previous model, the question naturally arises as to whether the new purchase is worthwhile. Are there any visible differences? Basically, the tub hasn’t changed at all. Apart from small details such as the driver’s printed viewing window at the front and the printed rear, the rest is almost identical. The lower hull and tracks are absolutely identical and both run smoothly, regardless of the surface.

The situation is different with the turret. This has been completely revised and looks much nicer in my eyes. It is more massive and the space between the hull no longer exists. The old turret looks small and flat in direct comparison.

The new Tiger I got the hull and the turret from the new Tiger 131 and therefore of course looks almost identical, if you disregard the camouflage of the desert version. In addition, the Tiger 131 has other details that give it an even more beautiful look. A spade adorns the front and a pipe system on the rear. The hoses on the sides are missing for this. In addition, it is completely printed, while the Tiger 1 has only a few prints and many stickers. Unfortunately, the crossbars of the Tiger I are only stickers.

It was clear to me that I wanted to have both. But if you stand between the choice of models, the decision should be difficult. The Tiger 131 is probably ahead of the pack because of its details.

While the turret has changed significantly, the rest looks more identical. If you are not a collector and already have the old version, you naturally ask yourself why you should buy the new one. In my opinion, the more massive turret brings a clear increase in optics. But if you just want to have a beautiful Tiger and do not yet own any of the 3 models, I would rather take the Tiger 131.