With new versions and revised models, of course, you are always curious about what has changed. I took a closer look at whether the Königstiger 2019 is positive, negative or simply neutral. 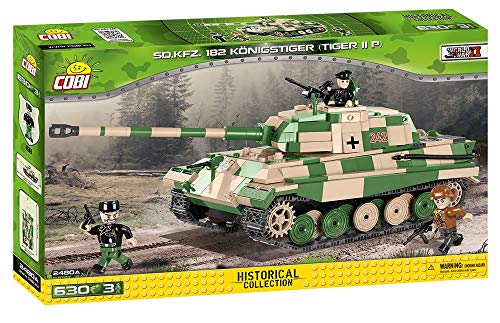 Instead of improving the Tiger I, an almost completely new model was developed and the heaviest German tank of the Second World War came out. Although the turret was originally rejected by Porsche, it was nevertheless used because the Hentschel version was not ready for use. With a weight of around 70 tons, it had very heavy armor that could hardly be cracked from the front. With his 8.8 cm gun, he was able to destroy enemy tanks at a distance of 3 km. From 1943 to 1945, however, only 492 King Tiger were built.

Cobi once again delivers the usual high quality level. There were no missing parts or stickers. All parts are printed.

There is nothing new to report here either. The instructions are clear and also suitable for beginners. The graying out of old building steps makes it easier to place new stones. The trading card is also included in this model. After 3 construction phases with a total of 124 construction steps, the building fun is unfortunately over again.

The rather small and inconspicuous hull does not indicate which large tank will come out in the end. Here 2 quite large 10×16 plates are used. After the hull has been more than stabilized with plates and large 2×10 bricks, the two motors are installed. We build the front armor separately and only then put it on the tank. In the next step, we set plenty of snot’s (studs not on top) to reverse the direction of construction for the side armor.

The rounded armor and the two side skirts are also the biggest visible change on the new model. As with all tank models, there are following plenty of tiles and then the rollers.

Since we have to assemble the large tracks in this model, the tracks are quickly finished and attached to the model. In contrast to the predecessor, these also run significantly better. No pressure is required even on smooth surfaces. Of course, the turret again receives plenty of stones to reverse the direction of construction in order to be able to display the entire slopes.

It end with the gun. The figures have not changed from their predecessors. Exactly the same figures are included.

Comparison to the predecessor

At first glance, it is obvious that the arrangement of the tiles for camouflage has changed slightly. By changing the side skirts, the new King Tiger looks a little narrower. The rear of the old model also looks a little bulkier. Due to numerous small changes in the structure, the tracks on the new version fit better and run significantly easier. Even on smooth surfaces, a simple push without any pressure is enough and the tracks run perfectly.

All in all, of course, small changes can be seen everywhere. However, in most cases these are not that serious. As the supposed successor to the Tiger I, it is of course also worth comparing these two models. Overall, the Tiger I is of course a bit smaller. But when viewed from the front, it looks even more massive than the Tiger I.

I actually wanted to skip this model, but as a collector it is difficult to do without a revised version. However, if you are not a collector and already own the predecessor, you will not get a completely new model with serious changes. You already think twice about whether the purchase is really worth it. It would have been nicer if there had not only been a simple revision, but the successor had been equipped with the Hentschel tower. Unfortunately, the old pictures are still displayed on Amazon. But the new model will be delivered.