Many have been waiting for this model. The result is a successful and stable implementation of a modern combat aircraft made of bricks. 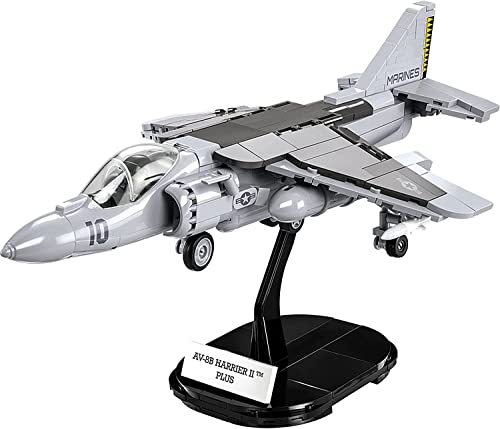 With 424 components, this model is more of a smaller representative among the modern fighter jets. These parts are divided into 2 construction phases with a total of 97 construction steps. Only new components to be placed are shown in color, while the rest is completely grayed out. Since only a few parts are ever installed, assembly is child’s play and not rocket science even for newbies.

The result of the first construction steps could well be the turret of a tank. Only the extension and use of various molded parts suggests that it is more of an airplane. The cockpit is also a molded part, which is provided with 10 typical COBI studs for reversing the construction direction.

It is now clear that a modern combat aircraft is emerging. The pilot, at least the upper body, has found its place in the cockpit. Here, too, an oxygen mask was used. The fuselage will now be completed and the jet engines will be attached. This of course also includes the typical Harrier thrusters, which enable a vertical take-off. The rear has been implemented very nicely. The rudder is built and receives 2 printed stones. The rear wings are angled slightly.

The wings are quite small and therefore built quickly. They look really great with the dark gray tiles. The undercarriage cannot be folded and is attached at an angle. What seems a bit strange at first, reveals itself as soon as the wings are attached to the fuselage. Since the main wings are also beveled, the wheels are ultimately straight again. After 2 more wheels and 2 bombs have been attached to the fuselage, it is the turn of the stand. I modified this a bit so that the plane is tilted forward and you don’t have to look at the less beautiful underside. You can see how this works in the video.

I had expected a rather unstable aircraft due to the many inclines, but was quickly taught better. Nothing falls off and you don’t have to deal with falling parts during assembly. The Harrier is also very successful visually.