The 1:48 scale from COBI is enjoying increasing popularity and with this model, the Churchill I is getting a successor, which is also a bit larger in the model. 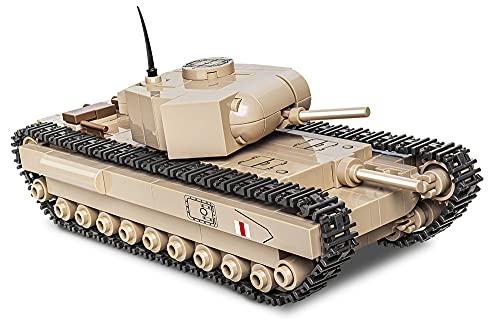 The 301 components are divided into 71 construction steps. This means that only a few parts are installed per construction step, which, together with the grayed out previous steps, make it very easy.

The hull of the Churchill Mk.2 is not built from the mandatory plates, as one is used to from other models. Instead, it is built from bricks in 2 halves, which are then connected by reversing the direction of construction.

There are no real castors on this model. 1×1 round plates are used for this purpose. Of these are used abundantly on both sides. The rear gets a few meager details before we can get on with the tracks.

With a scale of 1:48, of course, the smallest tracks are used. We have to tie 40 per page, which is of course only moderately fun. But at some point this will also be done and we can devote ourselves to the tower. First we create a small base from the reversal of the construction direction, to which the side armor is then attached. Overall, this turret looks quite strange and bears no great resemblance to the original.

In contrast to its predecessor, the gun is quite sparse. Unfortunately there was also a missing part, which has unfortunately happened more often recently. After all, subsequent delivery is problem-free and also happens very quickly.

Of course, this model belongs in a complete collection. Otherwise, however, I wouldn’t buy it. The turret reproduces the silhouette of this version halfway, but still looks rather deformed.