There are some nice models in the new WW2 series from Sluban. The brick quality is said to have improved significantly. Of course I had to take a closer look at this model. 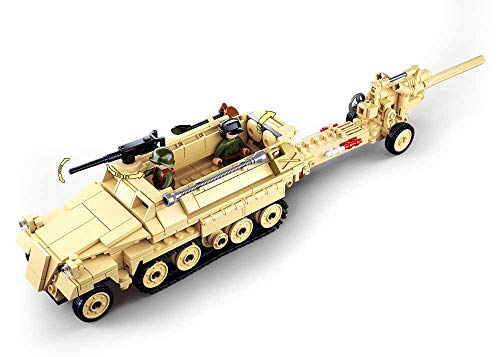 Sluban has announced that the new series of bricks is of better quality. This set couldn’t quite convince me. Some stones just sit too loosely and they even fell off on their own with the gun. The quality in terms of color and cast is good. There are still outliers in the clutch power.

With this set, Sluban did not allow himself to be ragged and supplied a proper booklet. With many other sets you have to be satisfied with a leaflet. However, here too, significantly more modules are used per construction step than is known from Cobi and various other manufacturers. A total of 33 construction steps are required for the 460 building blocks including figures. There are no separate construction phases.

In the first step, we build the trailer together with the gun. The entire basic structure could be built quite well. The gun is built separately and attached later. You have to be very careful, otherwise everything will collapse. The individual parts of the gun are so loose that they fall off by themselves when you touch them or hold them overhead.

The vehicle can be built a little better. However, since the Sluban plates are quite soft, they bend quickly if round plates are only placed at the corners from below. As a result, one or the other brick jumps off again. After the first row of bricks was set, everything went a little better. The tracks are attached comparatively early. Since they are very tight, they roll extremely moderately and you need the right surface.

The difficult part is already done at this point. There are only the superstructures for the driver’s cab and the loading area. A few details such as lamps are of course also attached. Otherwise, the vehicle is rather rudimentary. There are no stickers or prints.

After the last details, we are still building the machine gun, which can be attached to both the vehicle and a stand. Finally, we put the figures together. These have no weapons, even if they can be seen on the packaging.

In terms of price, these two models are not that far apart, even if the gun attached to COBI is a separate set. In terms of quality, however, Sluban cannot keep up with COBI. Their vehicle is simply more solid, more detailed and completely provided with prints. The clutch power of the bricks is also significantly better at COBI and, above all, remains the same.

Visually, this model doesn’t look too bad. In terms of quality, however, it is not what Sluban promised. Because of the look, it has found a place in my collection. The loose bricks don’t play such a big role here, because I don’t play with them. I’m also not quite sure what Sluban thought about the clutches. Two directly next to each other ensure that the attached gun cannot move in the curves. It looks a bit strange and the entire model cannot be positioned on the shelf.