The 1:48 scale got another tank, even if it is now the third T-34. Maybe it differs in structure from the other variants. 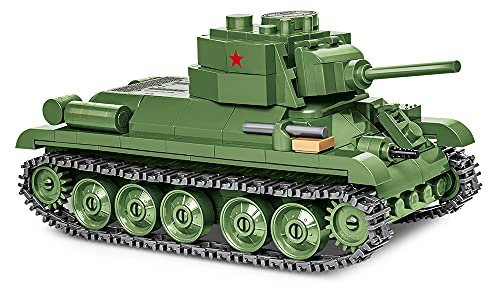 Anyone who has already built the first T-34 from the 1:48 series will find almost no differences in this construction. The hull is built in the same way and also gets 2 thin tiles as construction support. Then several layers of plates are used and the first details are attached. This is the only difference to the T-34 from the WoT series.

Track rollers and tracks are also absolutely identical. However, unlike most American models, they run absolutely perfectly. The only thing missing is the turret, which will initially be given a base from the reversal of the construction direction.

As with the large models, the side armor is built separately and then attached to the turret. Since it is a 2in1 model, you can choose between the emblems of the Polish and Red Army. So far I’ve always used the red star and here I just use both so that each side gets a different badge. Another difference to the first T-34 is the shorter barrel. But with this we have already reached the end of the construction.

I’m not sure if we really need a third T-34 from the 1:48 series. You have to be a collector who wants to have all the variants. Otherwise, one of the three is sufficient, as they hardly differ in construction.