The A7V was also revised by COBI and made slightly smaller by the 1:35 scale. But he can be opened and has received an interior. 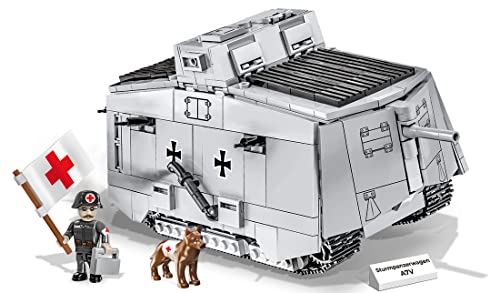 You can already tell in the first construction steps that this A7V is smaller than its predecessor. Nevertheless, there is room for a built motor and a storage for grenades. Before any of the armor is built, it’s the turn of the tracks. These are one size smaller than on the old A7V and are not as smooth-running either. But with plenty of pressure from above, they also run on my smooth acrylic plate.

The front and rear are almost identical in structure. The front gets a gun barrel and the rear 2 machine guns. These consist of molded parts that are also known from the airplanes of the First World War. The side armor is attached to only 2 hinges and can therefore be opened at any time if you want to see the interior.

From a purely visual point of view, the new model naturally looks like its predecessor. It’s just a little smaller, because COBI wants to be more based on the 1:35 scale in the future. Therefore, one should not expect overwhelming interior design. But it is enough to bring more building fun.