Another manufacturer has discovered the world of military bricks and comes directly onto the market with a large technic model including remote control in excellent quality. 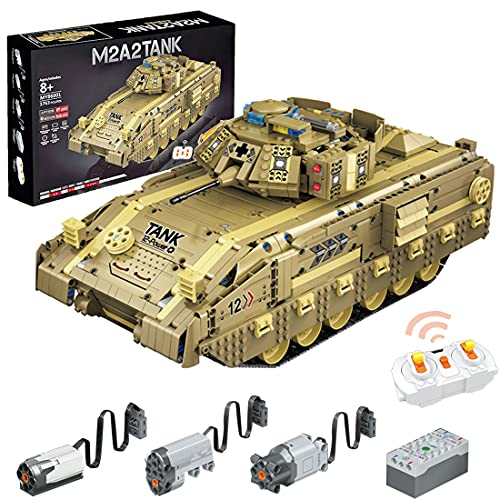 This set was made available to me for the purpose of assembly and review.

The beginning consists of plenty of lift arms and pins. Only after a while does it become apparent that the turret is being built here. Since this is an RC set, the first motors are installed. Thanks to a really cool gearbox to which a servo is connected, they have several functions at the same time. The turret can be rotated, the armament folded up and the firing mechanism operated. At the moment, however, it works rather poorly than well. 2 small gears tilt quickly and it cracks violently again and again. If it stays that way when everything is fixed, then these will probably not survive long and will wear out quickly.

Long, yellow axles are used for the rollers. With this technique and the later suspension, a suspension can be simulated that works really well. Since everything is still quite shaky at the moment, a frame is built to which the battery box is also attached. Some of the cables on the motors have to be extended so that they fit into the battery. Apart from the firing mechanism, everything is really stable and can be built perfectly.

As good as in the instructions, the cables cannot be hidden at the moment, as they keep sliding out. A Modified Plate was attached to a connector through which it can be plugged onto a pin. Perhaps that should have been done with the other connector too. The rollers are built individually as several parts. Thanks to the axles, which turn slightly under pressure, we have a well-functioning suspension, which I will of course test in the field later. After the massive tracks were also put on, the engines were tested for the first time. Although the battery was only charged briefly, the motors have a lot of power and driving is absolutely perfect. The basic framework is now ready and we are building the upper cladding with large panels.

The IFV is now clad all around with further large panels and numerous small details such as hatches and viewing windows are attached. Due to the design, however, the hatches cannot be opened, even if the attached hinges appear. After a lot of tinkering, I also managed to get the launcher working. However, it does not sound healthy. The two pins that simulate the missiles are quite tight and cannot really be fired.

Finally, only the machine gun is attached and the IFV is ready.

For a technic fan, the M2A2 is a great model. It is easy to build and the components are of excellent quality. It appears that the same bricks are used that Mold King uses. The remote control also works perfectly and the motors have a decent performance. Control via app is also possible, but I cannot recommend this. It is not available in the Play Store and has to be downloaded from a Chinese site, for which Chrome will spit out a warning directly.