This model is a real bummer when it comes to size. With a span of 66cm you need a little more space on the shelf. 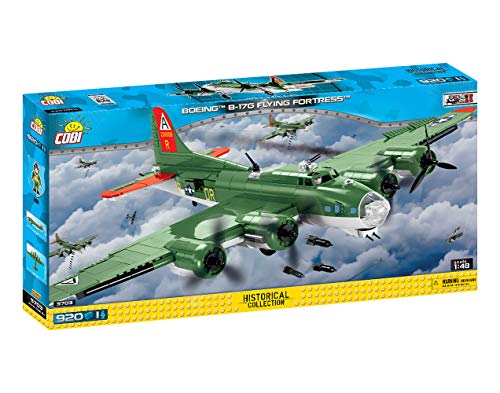 Since this model consists primarily of wings, these are built first. Plenty of plates are stacked here on top of each other, giving the wing great stability.

After the engines have been built and everything has been tiled, we already have a large part of the entire set ready. Since only panels are primarily placed in these construction steps, it is more hard work than a challenge.

The front area including the cockpit begins with a large molding. After the lower part has been completed, the two wings are attached, which are currently still very wobbly connected.

By building over the middle area, that changes quite quickly. A small mechanism is built for the lower gun, which later has to be fished out and stabilized with a part separator in order to attach the dome with the machine guns.

In the following steps we will build the stern and attach it to the front part. The middle part is now completely built over. There you shouldn’t touch the bomber if possible, because the side parts were not countered with a small 2×1 plate. They immediately fall into the plane and have to be fished out of the bomb bay from below.

Finally, we finish the front with another molded part, attach the propellers and separately built side panels.

Apart from the few small weaknesses that could have been fixed very easily, it is a great and, above all, very large model. In terms of price, it tends to be at the upper end based on the number of parts. The many prints come at a price.