This aircraft was used in the Korean War shortly after World War II and was the most built jet aircraft in the world with around 18,000 units. As a model it makes a good impression. 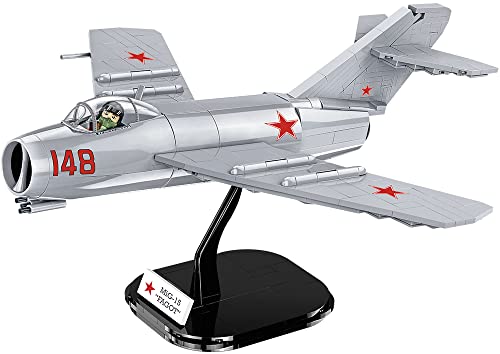 Construction starts with the complete wing construction in one piece. Plates of various sizes are countered with flat tiles with studs on the underside and then tiled on top. New components are also used that I have not had in any other model before. The hull is built in 3 stages. The middle area is built first. This consists of large slopes, which quickly adds mass to the whole. Then we continue with the cockpit, the underside of which consists of a large molded part. The stern is built with a lot of direction reversals so that it can be shaped into the desired shape through slopes.

Before the fuselage is closed, we build the complete rear wing. No molded parts are used here and bricks and plates create a massive construction, which is a little wobbly here and there. The middle area is now partially closed and then it continues with the cockpit. Since this does not contain a seat, the pilot is reluctant to remain seated thanks to the hose attached to the oxygen mask. It is best to close the cockpit with the upper molding first. As soon as the cockpit glass has been inserted, the pilot is finally in the right position.

Since the upper area is now closed, we continue on the underside. Since the landing gear cannot be folded, it must be removed completely if you want to place the MiG-15 on the stand without landing gear. To close the gap at the front, a 1×4 tile is included with the set as a spare part. The stand is larger and more stable than the typical stands found on smaller aircraft. It consists of 3 instead of 2 layers.

You cannot complain about a lack of stability with this model. You shouldn’t necessarily touch the MiG-15 by the rear wing, but otherwise it can be lifted and held at any point. The size can definitely keep up with the models of modern COBI combat aircraft. Overall a very good design and value for money. The other MiG-15 from COBI are completely identical, only have different imprints of the respective country of operation.