The last P-51D came as a Top Gun Special Edition and had a completely different shape than this model. For this, this version has a historical background and all the appropriate markings. 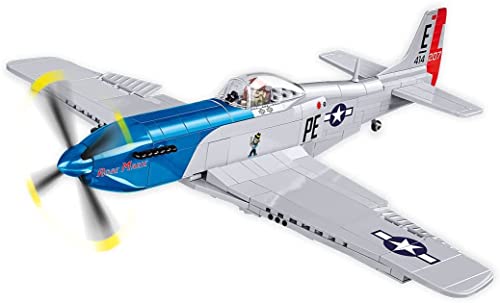 The beginning of this model is once again the wing construction. Even if everything is quite stable in the end, the construction is quite shaky. Many parts are only placed on one stud and only later connected to other parts.

In the next step we build the rear, which consists of various molded parts. Then it’s the turn of the front, including the engine and propeller. A large molded part is used here, on which the historical lettering “Rose Marie” and “The Kelly Kid 2” were printed. Front, rear and wing construction can now be put together. Again, the pilot gets an oxygen mask.

The landing gear on this model doesn’t get the nice new moldings of COBI’s other new aircraft. That’s a pity, but understandable, since the current design is more like the original. Only the typical base is missing and the model is finished.

The shape is quite different from the Top-Gun Edition and in my opinion doesn’t capture the original as well as its predecessor. It’s too flat for me and not as bulbous as the original. Otherwise, it’s another nice model from COBI that delivers the usual quality.