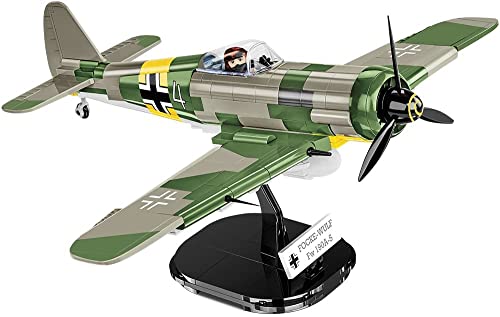 Almost completely in black, we start with the construction of the front fuselage area. This includes both the machine and the cockpit, which until now has consisted of a seat and a joystick. Then it’s the rear’s turn, where large, colorfully printed moldings are attached.

The entire wing construction is created in 2 stages. First the wing tips are built in parallel and then the middle section. After the 3 parts have been connected, the building direction is reversed again. In this way, perfect curves can be realized on the front of the wings. The front, rear and wings are now plugged together.

The cockpit is now disguised and the pilot can be deployed. Only the cockpit glass domes are missing and we can attach the propeller. The fuel tank on the underside looks a bit odd. I think it could have been designed better. The chassis is all the better for that. In contrast to its predecessors, this one not only looks much better, but is also more stable and can be completely retracted. Finally, only the well-known stand has to be built and the airplane attached.

There were hardly any changes between the last two versions. It’s completely different here. The new FW 190 has not only received a new camouflage pattern, but also a significantly better chassis and significantly better proportions. The curves are almost reminiscent of model making. In addition, there are no more stickers in this set. Buying this model for the collection is worthwhile even if you already own the predecessors.