It’s hard to believe, but the T-72 is currently one of the most used main battle tanks worldwide. Therefore, of course, it belongs in my collection as a model and I do not want to withhold the construction from you. 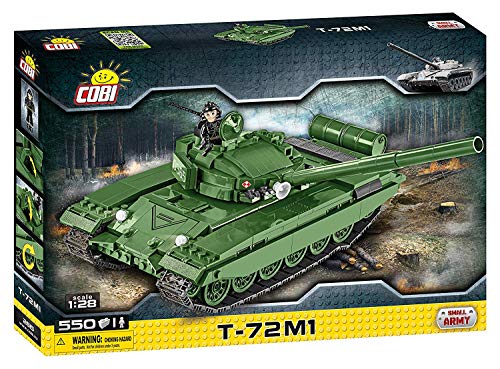 The construction of this Soviet main battle tank began in 1972 and, of course, fell into the middle of the Cold War. The improved variant M1 was built from 1982. Currently, more than 9,000 are still in Russian possession, even if only a small part of it is still operational. The T-72 was used in many modern wars. Including in both Gulf Wars and currently also in the civil war in Syria.

There is nothing new to report here. The quality of the bricks is excellent. There were no missing parts or wrong castings. There are also no stickers in this set. All parts were printed, some in multicolor.

The construction fun for this model consists of 2 construction phases and 91+ construction steps. 91 are given in the instructions, but this is followed by another page without numbering, on which some small parts are built. Otherwise, the previous construction steps are grayed out again so that the colored new parts can be placed without any problems.

A large and a small plate make the beginning and, as you are used to, are reinforced by further plates. After the receptacles for the rollers follow 2 separate construction steps, in which the device for the front, rubber-coated wheels and the rear drive wheels be built. This is followed by plenty of bricks and plates for stabilization.

Next is the front armor, which has to be positioned exactly. Then we take care of the side armor and the indicated engine.

The black of the lower hull, which is still visible, is slowly giving way to the green and the tiles, which cover almost all the studs. With this we have already arrived at the rollers and the tracks. Unfortunately, these are a bit rough and you need light pressure so that they roll on smooth surfaces.

The hull is finished and it is the turn of the turret. As usual, COBI is not stingy here with a reversal of direction. The armor of the relatively small and flat turret is built in several separate construction steps and then attached. In addition, there are many small defense details.

Now only the long 125mm gun is missing and the tank is ready. Well. nearly. After the last construction step, a hatch and 2 tanks are attached.

Compared to the WW2 models, this tank is significantly flatter and has a smaller turret. The construction was a lot of fun again. Both the good brick quality and the printed parts contributed to this. On my shelf he found a place between the other more modern tanks, like the Leopard 1.