COBI can ships. They have proven that many times. The light cruiser HMS Belfast is again a successful and extremely stable implementation of building blocks. 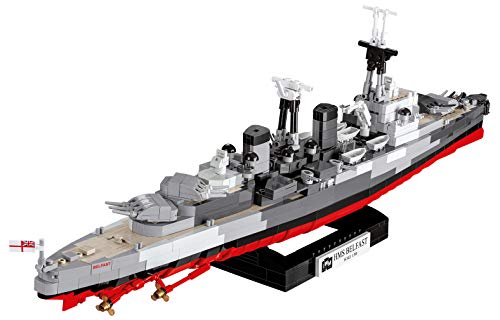 Unsurprisingly, we start again with the fuselage for this ship. The first construction steps deal with the bottom of the middle part and a rough frame. Then it’s the turn of the rear, which is almost completely built. Even the propellers are already being attached. The same is done with the bow. We complete this including anchor chains.

Now all parts can be put together and we see the dimensions of the ship. Being only a light cruiser, it is of course comparatively small. The sides of the fuselage are not built in several small steps, as is usually the case. Instead, 2 large constructs are created that cover almost the entire fuselage. This is also finished and we take care of the deck.

The Belfast does not have large superstructures. Many smaller details are built, the two chimneys being among the largest. In the last construction steps, the 4 turrets have to be built, which only differ in color. The base looks similar to those of the other ship models, but is a bit smaller.

I really like the look of the model. Stability and quality are at the usual high level. However, unless you’re a collector, you’re more likely to opt for one of the more well-known models.