Getting the limited edition really wasn’t an easy task and I had to go a long way. Even if the actual ship does not differ from the Standard Edition, it was worth the surcharge. I wanted to have at least one certificate. 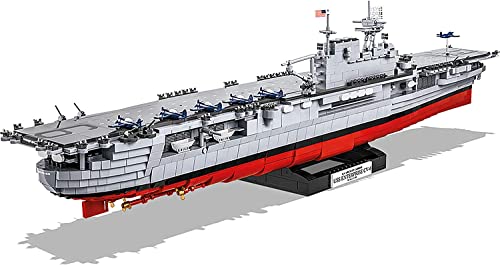 The US Navy aircraft carrier was deployed for just 9 years, from 1938 to 1947. Like the Yorktown and Hornet, it belonged to the Yorktown class and was the only carrier to survive the Second World War. Thanks to a bad weather front, she was not in Pearl Harbor when the Japanese attack took place. The crew consisted of 2217 to 2919 men, depending on the mission. The USS Enterprise has participated in almost all battles in the Pacific War.

One could almost think that COBI had once again increased significantly in terms of clutch power. Some bricks and plates really needed a lot of strength to get them together. But you can also use the ship as a baseball bat. There were no missing parts again and all parts on this model were printed.

The fact that my model is the limited edition of course at first I saw the certificate. In total, the instructions consist of 3 booklets with 11 construction phases. After 479 building steps, the long-lasting building fun was over. At the end of the manual there has been an overview of all parts used for some time.

As with most ships, we start here with a lot of reversal of direction. After a few construction steps, you can slowly imagine that we are currently building the bow of the ship.

This consists of 2 parts, which are then put together. The first detail in the form of the anchor chain is already used here. However, shortly afterwards this is also covered by the flight deck and can still be seen.

Next up is the rear. This is based on a series of plates that give enormous stability.

After the rear has been largely completed, it is the turn of the middle section. Here too, a lot of work is done with reversing the direction of construction, since the side parts are always built separately and only then attached.

Before we connect all parts, the underside receives the 4 propellers of the engine. Now we see the ship in full length for the first time and continue with the side panels.

The long bricks with which the middle section is now build have an enormous clutch power. It takes a lot of strength to push them into position. After the 4 lifeboats have been attached, we finish the flight deck with the large, printed tiles. Next we build the bridge and deploy countless small anti-aircraft guns.

Now we can breathe life into the flight deck and build the 10 small planes. These consist of a molded part, a 1×1 round plate and the propeller. At this point, the main differences to the Standard Edition come to light, which only has 6 aircraft and a white type plate with no data.

Just under EUR 170 is of course a proud price. But I’m glad that I treated myself to the limited edition in this case. Maybe it was also because I didn’t have a limited edition yet and just wanted a certificate 😉

This should definitely be noticeable when reselling, if I ever sell them again. Otherwise, this model differs from the Standard Edition only in a few points. It has a two-part type flap with additional information and 4 other micro planes. Otherwise, both versions are completely identical.