As one of the most important aircraft in World War II, the P-51 should of course not be missing. In this case, we build a very special variant that is produced under license. 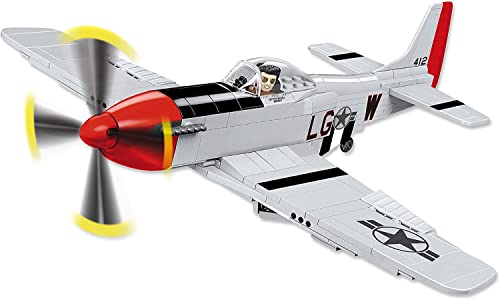 The first thing we get is a small sheet of stickers. That’s not nice, but with printing it would only be possible with great effort. The 265 parts of this set are installed in 60 bus steps. There are no construction phases.

Instead of the wings, we start with this P-51D with the middle part, to which the wings are attached. These are then built separately.

After the middle section and wing have been completed, we put everything together and give the pilot his seat. Now it is the turn of the front, including the engine.

I’d done the front and put the propeller on, it’s the turn of the stern. This hardly differs from other aircraft models. Several layers of plates, reversal of construction direction and 2 molded parts as rear wing. Then we put together all the parts that have been built up to here and get an almost finished aircraft.

Instead of the usual helmet, we give the pilot an appropriate hairstyle. Then we put him on his seat and build the cockpit. The landing gear is foldable and color-matched to the wings.

The rudder at the stern is again a molded part. After this has been attached, we get to the stickers. These go over several plates and could hardly be solved with one pressure. Instead, Maverick has his name printed on both sides in the cockpit. The P-51D is ready and it is the turn of the stand.

With a few plates and a molded part, the stand is ready. Finally, we just attach the printed nameplate.

I’m glad I didn’t buy the normal version of the P-51D and instead bought this chic special edition. There is hardly any difference in price.