The new Kettenkrad is a small model with nice details. Beautiful vehicles can also be built with just a few components. From a structural point of view, it is more of a small snack in between, which still does not miss the building fun. 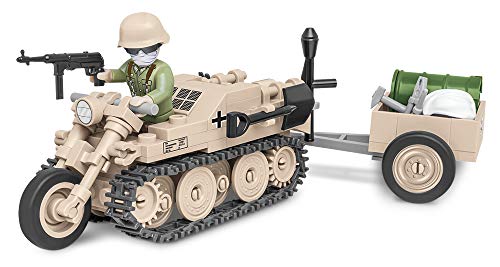 Of course, a small model only gets a little manual. With just 31 construction steps we completed the small Kettenkrad. All parts that have already been built are grayed out and only the new components are shown in color. There is of course a small parts list at the end of the instructions.

As with a tank model, we start with the hull. Everything is of course a little smaller than usual. The seats and a printed tile for the engine are placed on the wheel mounts.

In the next construction steps we will set various other printed tiles and finish the chassis. After that we turn it over and put the track rollers and drive wheels.

Since we build a Kettenkrad, tracks must of course also be combined. They can be easily moved on the model, but they really don’t roll unless you’re trying to do it on a carpet. Next we build the handlebars and add other details such as a hammer, a shovel and a bazooka.

The trailer is built from a few parts, but still looks very nice. The figure in this set has 2 different headgear. On the one hand the helmet in desert camouflage and on the other hand a turban. However, the sunglasses do not work with the latter. My model is from the first delivery that has a misprint on the nameplate. However, this has already been fixed by COBI and all new deliveries should no longer contain a Kattenkrad.

This Kettenkrad was used very successfully in World War II and has often proven itself. The model is a successful implementation, even if my version still has the error on the nameplate. But maybe for this very reason it will be worth more than the error-free version at some point.