You would expect visible improvements in a reissue and that is definitely the case with this Spitfire. All around there were not only new construction techniques but also new parts. 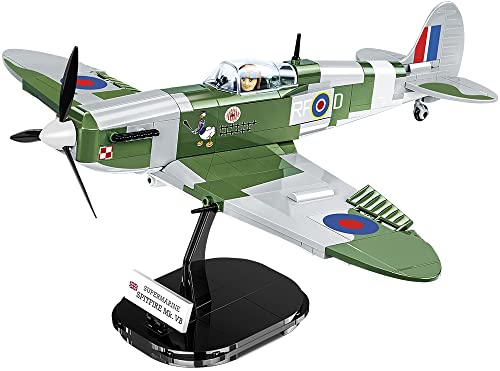 Not surprisingly, let’s start with the front and the cockpit of this WW2 fighter as well. By reversing the direction of construction, it is tiled all around and you can no longer see any studs. Molded parts give the entire front area almost perfect proportions and we are almost moving in the direction of model making. Then it’s the rear’s turn and is almost completely finished in the same style. Only the tail fin is still missing at this point. In the previous construction steps, numerous brightly printed tiles were installed. The front and rear are now plugged together.

The wings differ significantly from those of its predecessor. A larger framework of plates and tiles is created, which is then almost completely covered from the underside with the negative, thin tiles that COBI likes to use. This not only gives a nicer look, but also gives the wings enormous stability. The fuselage is then placed on the complete wing construction and the glass dome of the cockpit is attached.

After the propeller has also been attached, the landing gear is built. This consists of molded parts and looks considerably better than its predecessor. It can be submerged almost completely without it always falling apart. Now the printed rear wing is also pushed in. COBI has not changed anything on the base. As with the other models, I modified this one again so that the plane is tilted down. It’s easier to see on the shelf that way.

COBI often simply brings out a new edition and only changes small things. The Spitfire, on the other hand, has been completely revised and is therefore also worthwhile if you already own the predecessor.