Today there is another modern tank that COBI has given a complete facelift. On the one hand, this consists of more printed stones and, on the other hand, additional functions. 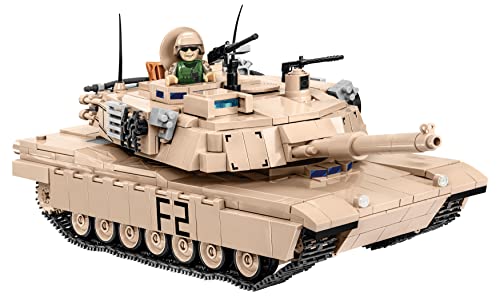 Initially, the construction of the Abrams differs only slightly from its predecessor. With small and large plates, a solid base is created into which a built engine is placed. In this new version, the rear gets gullwing doors that can be opened. In the case of the predecessor, these are only indicated. With this version, the tracks run excellently and do not need a rough surface. The finished hull is completely tiled and you can no longer see any studs.

Building the turret is almost as complex as the rest of the tank. It is gigantic and full of details. It is built almost entirely in one piece. Only small parts are built separately and then attached to the turret. A hatch can be opened in the rear area, under which there are grenades. This is also not the case with the predecessor. This set includes a minifigure.

If you already own the predecessor, you don’t necessarily have to buy this set, even if it has significantly more details. In that case, you could fall back on the Polish version, which has a green camouflage pattern. Otherwise you get a rock-solid model that doesn’t have to hide from any model building.