The new version of the HMS Warspite works entirely without stickers. How it looks with the printed parts and the details, you can find out in this article. 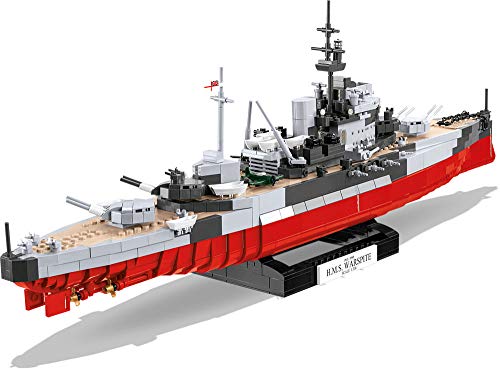 Despite the 1520 components, there is only one building instruction for this set. COBI has usually divided these into 2 or 3 booklets, depending on the size of the ship. Aside from being thicker, there are no surprises in this booklet. Old construction steps are grayed out and new ones are shown in color. After 4 building phases and 301 building steps, the building fun is over.

In contrast to the Bismarck, the hull is only built from 2 parts. Basically, the structure is very similar. Many plates are used as a substructure, on which a lot of reverse direction is plugged. In order to be able to make prints over several parts precisely, the parts were placed on a plate in advance. These are then gradually installed.

We also build the bow separately and then attach it to the front hull. We do the same with the stern.

After the front and rear of the Warspite have been roughly built, they can be plugged together. Now the entire middle part is filled in and the deck is created with slabs and tiles.

Before we start with the deck superstructures, we turn the ship over and take care of the propellers and seal the hull. The entire superstructure is made of dark gray and light gray stones.

Next up are the guns. A total of 4 twin towers are used, 2 of which are built in light gray and 2 in dark gray.

Finally we put the lifeboats in their place, build the 2 planes and the stand. In comparison with the Bismarck, you can immediately see how small the Warspite actually is.

Even if this model is rather small compared to the Bismarck, it is a very beautiful ship that provided a few hours of great building fun. Unfortunately there were some missing parts in my set that I had to reorder from COBI.