COBI has launched another model with a Top Gun license. With the F-14A and the two pilots “Goose” and “Maverick”, fans of the cult film can also enter the world of terminal blocks. 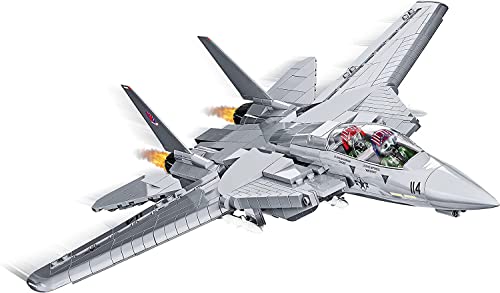 The first construction step consists of 6 small plates, on which a lot of 2×2 plates are then placed to reverse the construction direction. In contrast to other models, here, at least for COBI standards, quite a lot of building blocks are set per construction step. After several layers have been applied alternately on both sides, we have a massive block without cavities. With the engines, a different color is used for the first time.

The construction of the fuselage goes on for quite a while until the cockpit comes up. Since this consists of one large molded part, there is not much to do other than to set a few small components and the two seats.

The two pilots are of course Maverick and Goose, who are given an oxygen mask in addition to a striking helmet. In the next few steps it is the turn of the wings. The rear wings can be moved minimally by being attached using a ball joint. As with the original, the large wings can be folded in and out. The very simple mechanism works really well and you don’t have to worry that the wings will detach from the fuselage. Next comes the undercarriage. This is not really any different from the other jets from COBI. The rockets are also known to the experienced builder.

As the last step on the aircraft, we put the vertical stabilizer on the tail and build the small stand. This of course has the name of the model and the Top Gun lettering printed on it, as it is a licensed product.

Even if this model consists of a lot of large molded parts, there is still enough terminal block fun left. In addition, COBI has created a very stable aircraft that works perfectly next to the F-15 and F-18 that I built a while ago.