The upgrade of the Messerschmitt Bf 110 is available and brings us beautiful large-scale prints. You can see what else has changed in this article and the video. 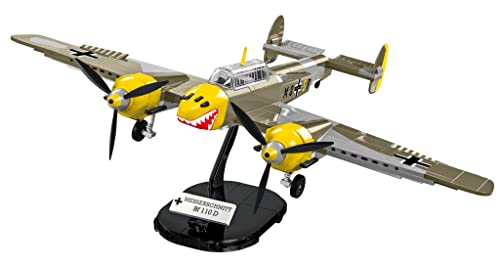 We start again, as we are used to with most larger aircraft, with the wings, which in this case are built separately and only connected when they are almost completed. While a large part of the camouflage pattern is created by tiles, we also find the first large-scale prints of this set here.

After connecting the two wings, let’s start with the cockpit. Both the pilot and the gunner get the typical COBI seat. Then we get to the stern and the tail unit. Once again, no savings are made on bricks for reversing the construction direction. The typical 2×2 plates with studs on both sides are used in abundance. Molded parts with large prints are used in the rear area. The previous model still had large stickers here that went over several stones. In the meantime, these are already loosening in my model in some places, which really doesn’t look nice.

Overall, this model does not save on molded parts. While the engines in the old model were mostly built from bricks, here the entire upper part consists of 2 molded parts. The cockpit glass and the front also consist of molded parts. Before this is set, I build the two figures and place them directly on their seats. Fortunately, at least the rest of the engines are built regularly and then installed under the wings.

In the last few steps we are still attaching the propellers and the front machine guns. The stand can be built quickly and is the same model that is used on the smaller COBI aircraft models.

A lot has changed compared to its predecessor. On the one hand, COBI uses the more appropriate color that was also used on modern helicopters and, on the other hand, no stickers need to be attached. That should certainly be a reason for using larger molded parts. You only have to print on one building block and not exactly over several blocks. Visually, the model looks great and is now getting the space that its predecessor occupied so far.