COBI has revised some models this year. This also includes the Junkers JU 87B, better known as STUKA. Of course I also built the new version and show you the differences to the old model. 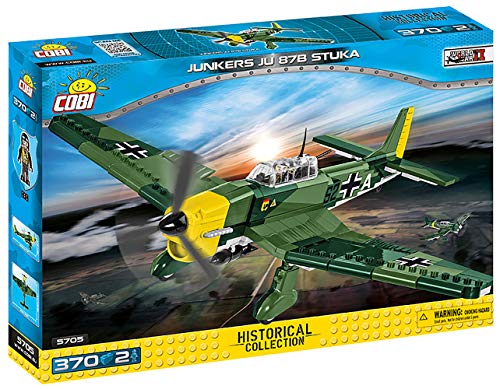 The JU 87B, STUKA, is believed to be one of the most famous aircraft in World War II. In contrast to large bombers, only a few bombs were dropped. Due to the dive, the target was targeted by plane and the accuracy of the target was significantly increased. With an airborne siren mounted on the B model – also called the Jericho trumpet – the aircraft also had a psychological effect on the enemy. Unfortunately, this fell victim to the facelift. The new STUKA can also be seen as a further variant within the B series. Both predecessors and successors to COBI show the typical armament. You could equip the airplane with a bomb up to 1000kg in the middle or with a smaller bomb in the middle and 4 more under the wings, as you can see in the old model.

Even if some new molded parts were used for this facelift, all components are at the known high level. In addition to some printed parts, there were also a lot of stickers. Unfortunately, this cannot be avoided with several plates. After all, whenever possible, was also printed on the narrow side of individual plates.

Old construction steps are greyed out and new parts to be set are shown in color, while being quite true to color. This is particularly important in this case because different shades of green are used and you have to look very closely. Even slightly different versions of supposedly the same components must be taken into account if you do not want to continuously separate the stable bricks and plates to correct errors. After 71 construction steps and some stickers, the aircraft is finished. There are no individual construction sections, which is absolutely not necessary with 370 parts.

We start with the middle section, to which the wings will be attached later. After the somewhat challenging slope has been created, we continue with the front and the propeller. Here there is plenty of reversal of the direction of construction and the small “bow beads” are used.

After the front with the new molded parts has been connected to the middle part, we go to the rear. Compared to the predecessor, this is somewhat wider. Then it’s the turn of the wings.

These differ slightly in appearance from the predecessor. As with the new FW190, a row of knobs remains between the tiles. The emblems are printed on both sides. Finally, the wheels and a bomb are attached to the bottom. The new stand differs only slightly from the construction of the predecessor, but is visibly smaller.

Comparison to the former version

Actually, the previous version cannot be called the “old model”. Both versions were used in this form. Only the bomb of the successor should have been larger, since a 500kg bomb was used for individual assembly. In some cases it even weighed up to 1000kg. The facelift also has to do without the machine guns and the Jericho trumpet, which originally has a diameter of 70 cm. So as a collector it makes perfect sense to own both models.

At first glance, the differences to the old model are only marginal. However, there are 2 variants that were also used in this form. Therefore it makes sense as a collector to own both models.