A small model does not necessarily have to be poor in detail. COBI also proves that after the Stuart with this small M8 Scott, which, however, does not belong to the Company of Heroes 3 series like the small M3A1 Stuart. 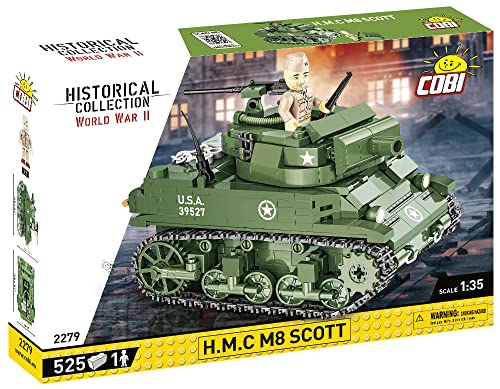 Up to the first picture, the structure is absolutely identical to that of the M3A1 Stuart. After that, he begins to differ in small details. However, the higher the hull gets, the clearer the difference becomes. The engine bears no resemblance to that of the Stuart. Its cover is only loosely inserted and not attached to any studs.

Tracks, rollers and all details of the undercarriage are identical to those of the Stuart. With a little pressure, the tracks also run quite well on slippery surfaces. The turret is an open variant not quite as strong as the Stuart’s. But you can’t call it unstable either. Unfortunately, the machine gun is just as wobbly and has a hard time keeping its position. There is also a small box and a type plate as accessories.

The small model has a relatively large number of details and looks really chic. However, it is not a bargain. If you are looking for something to play with, you can also get larger models for the same money.