The new F4U Corsair is also noticeably larger than its predecessors, as we have seen with other new aircraft models. This gives scope for more details and also greater stability. 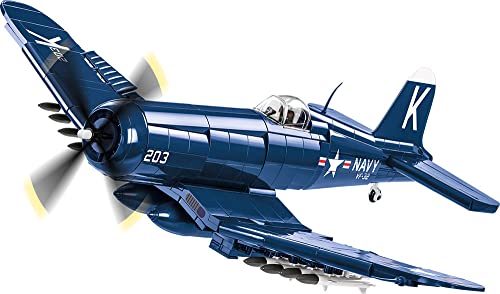 Even if the new version is larger, the structure hardly differs from its predecessors. First, the central area of the wing construction is built, to which the separately built wings are then attached. The bracket for the bent wings will be attached later together with the landing gear. In the coming construction steps, the fuselage will be built in 2 stages. By reversing the direction of construction, various tiles with large-area imprints are attached to these.

You need a little patience for the pilot, as the hose that is attached to his mask is very short. Now it’s time for the armament. Below the wing construction there is space for 8 missiles and 2 large bombs. The rear wings are built completely and are not just made of molded parts. This is an advantage of a larger scale. The base is basically the well-known construction. However, there is one small change. There is a Plate Modified on one side for the pilot to snap onto. A separate head without nubs and printed hair is included.

The new model is significantly larger than the other two versions that I already own. This offers more options, such as the built rear wing. With more components, there is of course a little longer building fun.