For a long time there was no KV-1 in the COBI portfolio. So it is not surprising that this new version was eagerly awaited by many collectors. And a lot has happened. 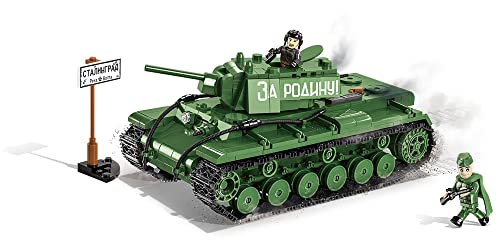 The set includes 2 large plates, but they are not used at the beginning. The base of the hull is formed by several smaller plates, which are then built up in layers and stabilized by the large plates. This gives us the typical COBI block, which is almost indestructible. The rest of the construction is very similar to the other tank models from COBI. A frame is created from bricks, which is then widened with plates.

Of course, this tank also gets an engine. However, this is not built separately in one piece, but created directly in the rear of the KV-1. After various hatches and numerous tiles, it is the turn of the chains. As usual with the large tracks, these run absolutely superbly on all surfaces. However, the gears that are put on the drive rollers are not of the usual quality. They keep accumulating and in the end I had to glue them in order not to lose them.

The turret begins with a small base and various stones to reverse the direction of construction. The side armor consists of slopes and is attached directly instead of being built separately first. You just have to make sure that the order is correct, as they are all printed. As a bonus, there is a small street sign in this set. One of the two minifigures is given a chic cloak that consists of a molded part.

The new version of the KV-1 is an all-round success. Anyone who also owns the KV-2 will quickly find that the hull is almost identical. Only the two gears of the rollers cloud the joy a little. They have no clamping force and keep falling off.