Unfortunately, I was late for the predecessor. Fortunately, there is this revised version, which of course I had to have and build immediately. You can read how this worked out in this review. 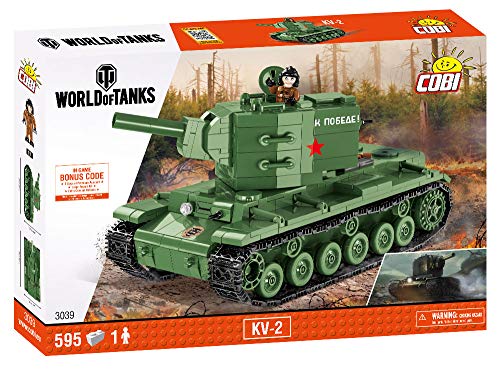 The KV-2, also KW-2 or Russian KB-2, was a 57t tank of the Red Army in World War II. However, its period of use only extended from 1941 to 1942. Around 330 vehicles were manufactured during this period. You can recognize it immediately by its characteristic tower, which was necessary for the installation of the mighty 152mm howitzer. In combat he was too slow and immobile, even though it was hardly crackable for German tanks at the beginning of the war. However, the production was not stopped for this reason. Rather, German troops have taken up the locations where it was manufactured.

The clamping force of the building blocks is enormous. In addition, the massive construction of COBI ensures extremely stable models that would easily survive in a child’s room. In most cases, however, it will be on the shelf of a collector. I have never had damaged parts at COBI. Missing parts are also extremely rare. The only possible point of criticism would be the sprue points, which are often clearly visible in darker shades. This can usually be avoided by turning the stones over.

The size and scope of the instructions do not differ significantly from the other models. There are a total of 121 construction steps, which are divided into 3 construction phases. As with all WoT models, there is also a sticker sheet with which the otherwise bare tank can be adapted to the model in the game. The graying out of the old construction steps makes it easy to recognize the positions of the new, colored stones.

As before, we start with plates and mounts for the rollers. The whole thing is then framed and stabilized with large bricks. This is followed by the first decorative elements and the front and rear, both of which are built separately and then added using SNOT technology. The machine is already recognizable.

In this model, the entire surface of the hull is not created with plates. Instead, separate side panels are built and placed on the model. Additional decorative elements are used, which will be built over in the later step and thus fixed. At this point we also start covering all the studs visible from above with tiles.

After all the tiles have been set, we start working on the rollers and tracks. In the subsequent test, the tank rolls extremely easily over the surface. Even a smooth surface cannot prevent him from doing so. Now that the tub is completely finished, we go to the tower. To do this, a small plate is reversed and then built up with bricks.

As soon as the tower has reached its full height, the side parts are built and attached separately. All that’s missing is the gun and a little covering and the tower can be placed on the tub.

In reality, the KV-2 looks even better than in the pictures. It is solid, stable and rolled absolutely smoothly. Unfortunately, I don’t have the previous model to see the differences and improvements.