Since I haven’t had this plane yet, the decision was easy despite the few improvements. As with most new models, there are no stickers here either. Everything was printed, even across several stones. 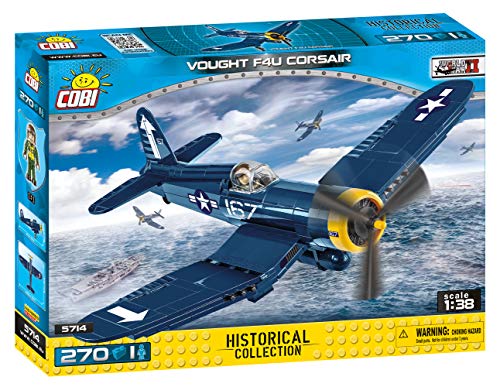 Visually, the machine naturally reminds us of a Stuka. In direct comparison, however, you can immediately see clear differences. Due F4U was primarily used in U.S. Marine Corps Navy Aviation Squadrons. Those who treat themselves to the USS Enterprise will get a few miniature models. The period of use extended from 1940 to 1953. In other countries even longer. The F4U was used in both World War II and the Korean War. A total of 12581 machines were manufactured.

The quality is again at a very high level. Connected plates can hardly be separated without a brick separator due to the high clutch power. It is all the more surprising that COBI still does not have its own brick separator. A special quality feature are the imprints, they sometimes extend over several parts.

Compared to the previous tank models, this guide is a bit smaller. In terms of content, however, it does not differ. Old construction steps are greyed out and all new parts are colored. Setting it up is really easy. Due to the small number of parts, there are of course no construction phases here. The 270 parts are in several small bags and are built in 55 steps.

First of all, of course, the many printed parts catch our eye. As a result, we end up with a much nicer look than with shabby stickers. We start the model with a floating construction. This makes building directly on the table a little more difficult. The best thing to do is to take the entire construction in hand and then plug in new parts.

Now the rear can be connected to the previously built middle section. The entire front used the same construction technology that was already used at the rear. Molded parts are used again for the area of the engine and the propeller.

After the front has also been connected to the rest, the cockpit is built. Then we set about the wings, which are built quite quickly and consist of far fewer parts than the JU 87B Stuka, which also has articulated wings.

Finally, of course, we still have to build the stand, which is visibly smaller compared to the older models.

Unfortunately, I can’t say much about the improvements to the predecessor. However, there are only a few differences in the pictures. There is no significant change in the wing section, as with the new Stuka. The 270 parts of this model can be installed very quickly and you get a very nice model from an airplane that can also be found on the miniature scale on the new USS Enterprise. The two models should complement each other wonderfully.