A T-34 naturally belongs in every collection and is the epitome of the Soviet tank in World War II. After that, it continued to be used in many countries for a long time. 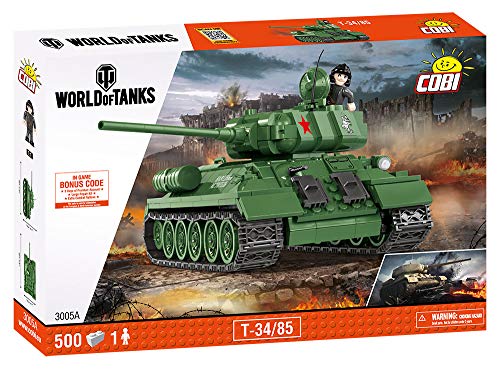 The clamping force of the bricks is enormous and you have to press very hard, especially with smaller parts, to connect them. If you separate them afterwards, they lose some of their clamping force. Only the visible gate points can be a little annoying here and there if a brick cannot be rotated.

As with almost all WoT models, there is also a sheet with stickers. Only a few hatches in black were printed. That is ok with the lettering. So you can adapt your model to the tank in the game. However, the sovereignty badge could have been printed. Since I didn’t want to cover a tile with a complete sticker, I cut out the red star with a cutter. Otherwise, the instructions are as you are used to from COBI. Greyed out construction steps and colored new parts. After 3 construction phases with a total of 70 construction steps, the T-34/85 is finished.

As usual with many other models, we start with a large 8×16 plate, on which the receptacles for the castors are plugged directly. While the hull is being build up, we build both the rear and the front in separate steps.

The separately built side armor not only makes the T-34 wider, it also adds color.

After the front and rear armor have been built and attached, we come to the tracks. In this size, they can be easily connected and run very easily. It continues with the turret.

This is manufactured in many small steps, they are usually built separately and then plugged in. After he was put on the hull, there are some small details like antenna and tanks.

There are no great special construction techniques with this model. In the A version, it has received slight improvements, especially on the tower. As a collector you definitely have to have a T-34 on the shelf.