After various American bombers, COBI brings a German version back onto the market. Like all new models, this is also fully printed. 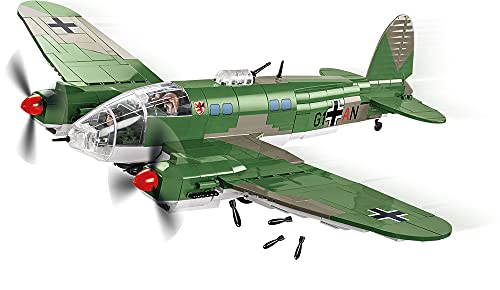 The structure is divided into 2 construction phases, which contain a total of 97 construction steps. In terms of presentation, COBI does not deviate from the current layout. Grayed out construction steps and new colored components run through the entire instructions until we come to the parts list at the end.

Building this model starts with the wings, which are built separately. First, the inner area with the two engines is built. The rest is done almost at the end. The cockpit gets the obligatory molded part again, which COBI uses in almost all large aircraft.

In the following steps we will focus on the fuselage and the rear wings. A lot of large molded parts are used here. Separate components with numerous prints are attached to the stern.

The entire front consists of transparent molded parts. After these have been attached, it is the turn of the actual wings. These are attached at a slight angle with a few hinges. The two pilots have to share the rather sparse space. Another crew member only consists of a head.

The remaining construction steps again consist of many molded parts. Propellers, bombs, and stern rudders are some of them. The HE 111 is now finished.

By and large, COBI built a very stable bomber. Only the connection of the wing construction is too shaky for me. Here 2 more plates would have been enough to give the whole thing perfect stability.